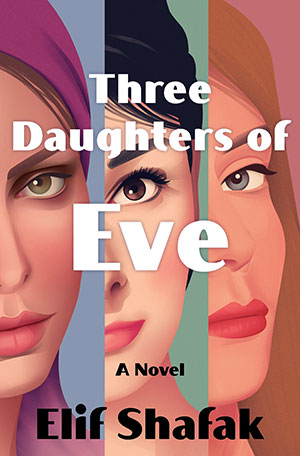 Istanbul and Oxford are over 1,600 miles apart, yet Turkish author Elif Shafak pulls them together in her tenth novel, Three Daughters of Eve. Shafak focuses her tale on a Polaroid photograph. Three young women and a man stand in the scene snapped years ago at the University of Oxford—forgotten until the picture flies out of the protagonist’s purse during an attempted robbery and rape in Istanbul.

In a harrowing scene, Nazperi Nalbantoğlu (“Peri”) is driving with her daughter to meet her husband at a dinner party in a seaside mansion. They encounter thieves. The disheveled mother and her daughter finally arrive at the dinner.

The entire novel takes up one night, rather than a thousand and one, but Shafak still plays the role of Scheherazade. As in her novel The Flea Palace, Shafak again shapes the structure as a story within a story, writing in third person. Peri ponders repressed memories the photo triggers while maids serve lavish courses. Present-day Turkey chapters intermingle with Oxford flashbacks and Peri’s Istanbul childhood. Leaving a bustling megalopolis for quiet Oxford was a major culture shift.

Croatian author Slavenka Drakulić asked in the title essay of Café Europa: “Is anyone today able to say where Europe, and all it stands for, begins, and where it ends?” Istanbul straddles both Europe and Asia across the Bosporus—the former Ottoman Empire still draped around it like a shawl. There have been so many different names for this city through the ages: Lygos, Byzantium, Augusta Antonina, New Rome, Constantinople, Konstantiniyye, Polis, Stimpol, Stamboul, Estanbul, Islambol, Istambol.

Nobelist Orhan Pamuk noted the complexity in a Telegraph interview with Sameer Rahim: “Istanbul is a vast place. There are very conservative neighbourhoods, there are places that are upper class, Westernized, consuming Western culture.” Shafak calls this contrast the “great fusion of the times: Muslimus modernus" ("Half Muslim, half modern"). Istanbul is currently Turkey’s largest urban area at 14.8 million—the vast majority Muslims.

In comparison, Oxford’s population is 161,300, with only fourteen of today’s 11,728 students Turkish. It was in Oxford that Peri met the Polaroid people: Shirin (a feminist Iranian) and Mona (a devout Egyptian American with headscarf). The title’s three daughters of Eve—Shirin the Sinner, Mona the Believer, and Peri the Confused—all gravitated toward the fourth person in the photo: Professor Azur, who taught a course called “GOD.”

In tantalizingly slow fashion, Shafak introduces him as a walking legend (think Richard Dawkins and The God Delusion). Peri, with a secular father and pious mother, wants “to change God.” She starts to view Professor Azur himself as God and takes his course. Shafak stages informal conversations about religion and politics while she has fun portraying academics and the bourgeoisie. Dinner guests represent many professions. “Democracy is passé!” states one. Another scoffs, “You’ll never get Scandinavian-style democracy in the Middle East.” Someone posits a “benevolent dictatorship.” Peri staunchly disagrees: “[T]here’s no such thing as a small god. Once somebody starts playing God, sooner or later, things will get out of hand.”

Shafak occasionally uses “God” in a figurative rather than spiritual sense, perhaps referencing a person who dominates or who’s admired. Say, Turkey’s strongman Recep Tayyip Erdoğan or Professor Azur? Students in the God course represent all viewpoints. They debate faith versus religion, theism versus atheism, justice versus injustice, Descartes versus Spinoza—and the Malady of Certainty.

As if peeling phyllo from baklava, though, little by little she uncovers the pistachios: secreted away is a scandal involving the inscrutable Professor Azur. Winston Churchill might call him “a riddle, wrapped in a mystery, inside an enigma.”

“We suffer in the hands of the gods that we ourselves created,” Peri realizes. Can she change God, or will she transform herself? Much as the star of the 1950s film The Three Faces of Eve struggled through multiple personalities, Peri sifts through hers. Three Daughters of Eve is a wide-ranging story of women within the zeitgeist.

Shafak probes difficult questions while shady business deals occur, a bomb goes off, and Peri confronts jinn (Muslim demons wielding supernatural power). The writing, while just shy of eloquent, is definitely excellent. Shafak’s eloquence is embedded instead in her storytelling. She uses fiction to take readers behind the borders of an ancient city known by more than a dozen names. Three Daughters of Eve is not only Peri’s search for identity but also Istanbul’s. 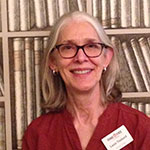 Lanie Tankard is a freelance editor, writer, researcher, and critic in Austin, Texas, as well as indie book review editor at The Woven Tale Press. Tankard taught English as a second language in Ngeremlengui on Babeldaop in Palau.