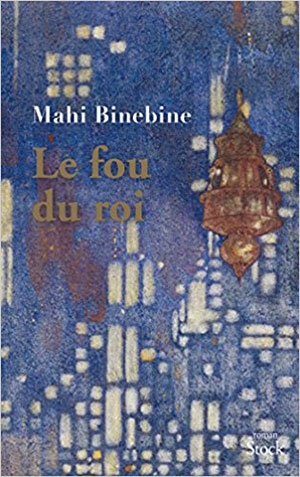 Writer, painter, and sculptor Mahi Binebine is the first and only Moroccan artist to have his works included in the permanent collection of the Guggenheim Museum in New York City. The sixth child of his family, Binebine was born in 1959 in Marrakech, the Ochre City, to a mother who worked as a secretary and a father who was a teacher.

Le fou du roi (The court jester), Binebine’s tenth novel, merges the author’s family tragedy and the national history of Morocco. Binebine’s narrative tells the story of his father, who served for thirty-five years as a sort of court jester and trusted companion of King Hassan II, and his brother, a young military officer involved in 1971’s Skhirat coup d’état. The almost Shakespearean scene of an armed officer entering the palace where his father is accompanying the king aptly depicts the deep divisions within Moroccan society during the so-called Years of Lead (1971–99). The son represents the many young officers who protested the rule of the monarch during the second half of the twentieth century and who, as a result, spent long years of incarceration in the mouroir of Tazmamart.

In previous novels, Binebine, who was personally affected by this dark past given his family’s own involvement with it, often took the side of his brother, who was openly repudiated by his father and imprisoned for two decades. Yet in this novel, which could be read as a text of reconciliation, Binebine allows his father to tell his version of the story, to voice his complex feelings about being a father and a loyal courtier.

Le fou du roi is a narrative that expresses the affectionate, almost carnal relationship binding the courtier and his ailing king. While many novels, biographies, and autobiographies of the twenty-first century recount the sordid memory of the mass incarcerations of the last century, Binebine’s novel stands out as a personal narrative of a father-son opposition at the very heart of political power. This familial confrontation is expressed through a series of binaries structuring the text: tragedy and comedy, love and hate, peace and violence, hope and despair. Ultimately, Binebine’s novel uses personal memory as the site from which to write the Moroccan collective memory of the Years of Lead during the reign of Hassan II.