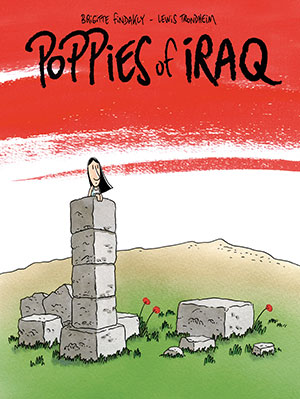 Poppies of Iraq, an autobiographical graphic novel written by Brigitte Findakly and illustrated by Lewis Trondheim, contains familiar tropes of contemporary graphic memoirs. Findakly negotiates national identities with one parent from the Middle East, one parent from western Europe; she conveys a disarming coming-of-age story in war-torn Iraq, lured by the dream of France; and captures the beauty of home, even amid cultural and religious repression. With nonlinear pacing and vignettes, however, Poppies of Iraq adds a unique storytelling angle to the themes of Marjane Satrapi’s seminal Persepolis and Riad Sattouf’s acclaimed The Arab of the Future. Findakly trusts the reader to collect her personal stories into a complicated understanding of home and belonging.

Findakly and Trondheim bring years of experience to this project as a colorist and cartoonist, respectively. Trondheim is celebrated for his Kaput & Zösky and Donjon series, among others, as well as being a founder of French independent publisher L’Association. The husband-and-wife team combine their singular experiences to create a narrative that captures the naïveté of childhood as well as the understanding of hindsight.

Poppies of Iraq opens with a young Findakly picnicking with her family at the archaeological site of Nimrod, the landscape spotted with wild poppies. These ruins are later bulldozed, and the destruction of Iraq’s history reflects the complicated relationship Findakly has with her own history. Her series of memories not only reflect the episodic quality of memory but also the unpredictability of Iraq under Saddam Hussein’s state control.

When Findakly is thirteen, her family moves to Paris, where and she immediately encounters isolation in school, saying, “Most difficult of all was probably my first essay assignment. Not because it had to be written in French . . . but because I had to express a personal opinion on a subject, something we were never asked to do in Iraq.” Her two cultures seem incompatible, which opens up the loneliness of exile.

Poppies of Iraq is a series of whimsical illustrations that tell the profound stories of homeland and belonging. This is a book that is a loving but critically honest depiction of Iraq. Findakly ends the book with a full page entitled “Good Memories,” where she says, “I loved those moments when we all had to stay home together.”