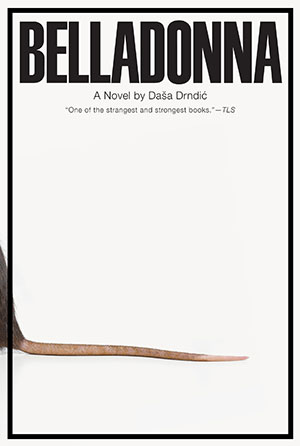 Belladonna’s title is a deadly plant; its Latin epigraph warns a society on a suicidal path: “Today it’s me, tomorrow . . . you. Who can escape?” This densely intertextual, self-referential historical metafiction, its scope and power remarkable, employs Sebaldian techniques to probe the Holocaust, the end of Yugoslavia, and neocolonialism. The protagonist of this apocryphal “manuscript,” its sixty-five-year-old author, Croat Andreas Ban, seeks to “cobble up a whole” from his “fragments.” His targets all too timely, Ban’s psychic odyssey charts our violent century “of cleansing . . . of erasure,” where form has eclipsed content, community the individual, ethnocentrism fellow feeling, dogma and lies the search for truth.

Ban emerges clearly from the apparently random memories that structure his “disjointed narrative.” In 1992 the Yugoslav wars disrupt his life in Belgrade. His beloved wife and mother dead, his Croat birth a danger there, this writer, psychologist, and humanist, friend to many Western cultural icons, flees with his young son, Leo, to a provincial Croatian town. There, his neighbors’ and academic colleagues’ “pathological patriotism” threatens them. Once Leo leaves to study abroad, Ban becomes “a superfluous man,” whose aging, cancerous body mirrors his spiritual malaise. Forced to retire, without work, most of his friends dead or dying, he feels himself changing. Citing Lacan—“You are your past”—he writes to discover “who am I?”

Ban’s narrative embodies the interconnectedness of events that shape both personal and societal histories. “Leafing through himself,” alluding to or dialoguing with texts and art from the classical era to postmodernism—e.g., Zeno, Huysmans, Eliot—Ban gathers memory scraps, braiding them with photos, images, letters, histories, objects, and lists. From initial scenes of self-silencing and suicide, the recollected horrors generate strings of interlinked phenomena that evoke the fate of the marginalized in a culture grown deaf to individual suffering. Reflections on Nazi objectification, for example, lead Ban to thoughts of dolls, a Nazi doll-maker from his youth, a tiny woman on a bus platform, the performing Ovitz family—“Mengele’s dwarfs”—and excerpts from the surviving Ovitzes’ correspondence. As in Drndić’s Trieste, the many pages listing names and ages of dead European Jews underscore a collective lack of compassion. Quoting the German artist Gunter Demnig, “People are forgotten only when we forget their names,” the non-Jew Ban bears witness.

With acid wit and verve despite his reduced physical and psychological state, Ban, like Camus’s Jean-Baptiste Clamence, whom the protagonist invokes, cries out in the wilderness against the perils of postmodernity: cultural kitschification; the academy’s validation of false values; the Western will to power that renders sick and aging bodies useless shells, erasing their inner personae; the flight from responsibility; those with “porous identities,” who once served fascists but now promote new powers; “father literature” that whitewashes or vilifies past generations’ sins, often in what “is not, but aspires to be, the language of literature.” Its own language compelling, open-ended notwithstanding its apocalyptic images, Belladonna resembles a prose Waste Land, an X-ray of our culture, Ban’s fragments, like Eliot’s, shored against the ruins of our age.