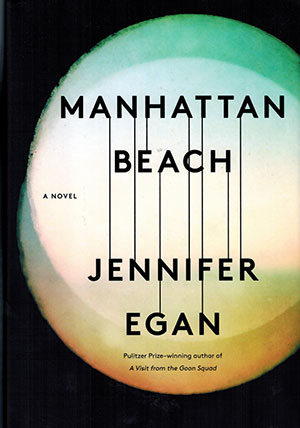 Readers have come to expect novels that experiment with form and structure from Jennifer Egan, but Manhattan Beach proves that expectations can be unmet in a spectacularly positive way. We quickly fall in love with Anna Kerrigan and her story in this straightforward and exquisitely rendered historical novel.

Set mostly in Brooklyn against the backdrop of the Great Depression and World War II, the novel begins with precocious eleven-year-old Anna and her father, Eddie, in a brief encounter with Dexter Styles and his daughter, Tabitha, on Manhattan Beach near Coney Island. Egan quickly moves to Anna in her late teens working in the Brooklyn Navy Yard. But the first scenes are crucial to where the characters are headed. It soon becomes clear that nothing is wasted in this novel, and the reader had better pay close attention. There is little that we can assume without Egan’s surprising us.

Anna, who is something of a loner, beats the odds and the prejudices of her co-workers to become the only woman diver doing repairs on ships. Breaking with the expected role of a woman in her era, she gains respect with the kind of grit one expects from a heroine. But there is a backstory, of course, and Egan trenchantly explores the confining circumstances of Anna’s family life in an apartment
that is “small, crowded, close” and where “femininity breathed from every surface down to the cheap wainscoting.” Throughout, Egan’s masterful descriptions are matched by her ability to delineate character through dialogue, even down to the inarticulate sounds uttered by Anna’s birth-damaged sister, Liddy.

As the novel reveals the lives of the overlapping characters, our focus shifts from independent Anna, to Anna among her co-workers, to Anna as a romantic figure. This last Anna is indelibly marked by her complex relationship with Dexter, a relationship underscored by a brilliantly sensual sex scene. Moreover, Egan captures the particular flavor of wartime New York and limns even the secondary characters with a finely rounded sense of where and how they fit into the world of the novel.

Overarching all, the idea and metaphor of the sea infuses the novel, from the Melville epigraph (“Yes, as every one knows, meditation and water are wedded for ever”), to Anna’s diving career, to Eddie’s time at sea, to the life-affirming remedy of the ocean.

Egan has done her research well, sometimes too well, as when she delivers details about measurements done with micrometers. But she also creates the beating heart of the time period with its struggling characters, moral complexity, class distinctions, and sense of danger mixed with patriotism. Throw in poverty, longing, and loyalty, and she seeds the narrative with deep and abiding interest. Manhattan Beach is a novel to savor.