James Wright: A Life in Poetry by Jonathan Blunk 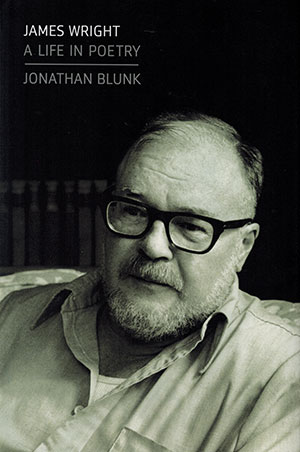 Jonathan Blunk reaches far into the future with this luminous biography of one of the finest and most important American poets of the twentieth century, James Wright. Nearly five hundred pages, the book is replete with four hundred pages of narrative, thirty-eight judiciously selected photographs, sixty-eight pages of extensive notes, acknowledgments, and a detailed, twenty-one-page index, making the book a necessary resource for Wright scholarship. Biographies are sometimes deadened by a merely dutiful and exhaustive recitation of chronological facts that fail to evoke the complex totality of the living spirit they describe. Though Blunk’s writing is accurate, dutiful, and exhaustive (as biographies should be), it is also vividly alive: a reader feels on every page as if he or she is in the presence of Wright. The narrative distance is gauged perfectly, providing an objectivity infused with awareness of the deep humanity and importance of this poet.

We seem to witness it all, the circumstances of every phase of Wright’s life, the inner and outer forces that shaped his character, events, and destiny. Through interviews, letters, journals, and unpublished poetry, Blunk develops an intimate proximity to the psychology and emotions of the poet, his motivations and his actions. In spite of the vacillations of interpersonal relationships and the vicissitudes of fortune that any life must endure, we see the poetic genius of Wright forging its self and voice in the furnace of circumstance, unwavering in its focus and devotion to poetry. This process was made even more difficult, however, by decades of alcoholism and episodes of major depression for which he was hospitalized multiple times—two factors which themselves contributed to the wreckage of his first marriage to Liberty and the eventual physical separation from his two sons, Franz and Marshall. All the interdependent and causal strands of the web of Wright’s life are here.

Throughout this book, we learn the biographical contexts out of which many of Wright’s most famous poems were written, and we become aware (more than ever) how authentic art always grows organically from the complex ground of understanding< of a particular consciousness, a particular life. Part of that ground, of course, is composed of the influence of other persons, other art—influence sometimes sought, sometimes fortuitous. Wright’s reading was largely self-directed and wide in its embrace, including, importantly (and early), Rilke, Trakl, and nineteenth-century German poets; Central American poets such as Neruda, Vallejo, and Jiménez; Dickens, Hardy, Dostoevsky—well, the list is global and very long.

Wright read voraciously, translated many of the foreign-language writers he loved, and memorized so much that he could recite widely from world literature for hours. Also, he seemed to internalize the cultural debate of his time about poetic form, which led him to his early and lifelong friendship with Robert Bly and friendships with many other poets, including Anne Sexton, Theodore Roethke, Galway Kinnell, Gibbons Ruark, Donald Hall, and others. The influences of these poets on Wright and his influence on them are incalculable, and many other such important intersections await the readers of this biography, including the example of a young folk singer who visited some evenings with Wright at his home in Minneapolis and who had just started calling himself Bob Dylan.

When Wright finally meets Annie, we understand the salvific nature of their relationship and the beatitude of their years together as man and wife (she is still alive at the time of this writing). Our hearts are broken (again) as we read of his tragic early death from oropharyngeal cancer, no doubt caused by decades of chain-smoking and alcoholism, and we are left feeling the cultural loss of poems that might otherwise have been written. The air is vivid with silence as we come to the end of this book. Wright’s journey ended with the completion of his final manuscript, This Journey, and we recall in our quietude the final words of one of its poems: “So much air left, so much sunlight, and still he is gone.”