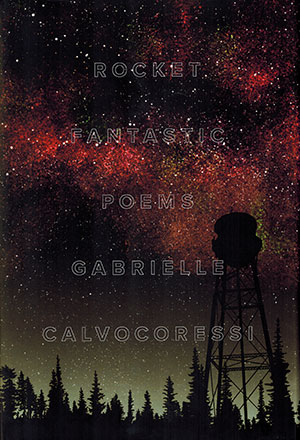 Gabrielle Calvocoressi takes us to a world that is at once arresting and comforting, both familiar and strange in her latest book, Rocket Fantastic. I did not want this book to end. It is wide open, vulnerable, and seductive—the most compelling thing I have read this year, without contest, and so very timely. So much of what we see in the world in this moment illustrates division, whereas these poems seek to coalesce. Calvocoressi takes us into a seemingly intergalactic realm through a smattering of characters, almost as if a twenty-first-century reimagining of a Dantean journey.

The many characters in Rocket Fantastic are, perhaps, a vision of an alternate reality where human expression and experience no longer rely on the strict confinement of gender categories. Central to this exploration is the Bandleader, whose gender is undefined and fluid. Rather than using a gendered pronoun, the Bandleader is marked by the musical symbol for the Italian term “dal segno,” which is generally used as a navigation marker in sheet music. Fitting that this anchoring term is used to represent such a character, whose own experience and confession lead us into a greater understanding of what a genderless utopia might be like.

What brings this collection together, as with all good poetry, is the vast beauty of the language itself: the way one word falls so effortlessly into another and how those words can burrow deep inside the heart. In one of the early poems, “The Sun Got All Over Everything,” a section illuminates how similar each human experience really is, how the many experiences we have in this human existence are far more similar than not. Sometimes the most overlooked, seemingly simple events are the most profoundly unifying, as in this moment where the speaker says, “I didn’t mean to go outside except there / the sky was, just ridiculously blue, / taunting me with pigment that I felt / the need to name.” And haven’t we all experienced this magnitude of awe when looking up at the sky? This simple observation is the thread that will keep humanity from its complete unraveling.

The characters, images, and language of Rocket Fantastic exist at the intersection of love and humanity—an ideal that seems entirely foreign but enchanting and necessary. We read on and we read on in this collection, and we want it to exist.