In the Name of the Father and Other Stories by Balla 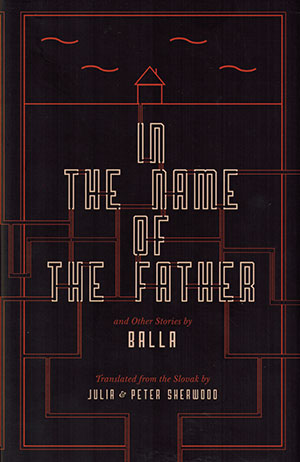 I wanted to like Balla’s In the Name of the Father, I really did. I was intrigued by the promise of a Slovak Kafka; I wanted to experience the Eastern European, post-Socialist take on magical realism. I wanted to celebrate the literature of a small nation. But, in the end, I was too distracted by Balla’s careless misogyny to be swept away by his whimsy.

Part of the fun of reading Balla is not guessing what will happen next, but trying to figure out what’s already happened and just exactly what he’s talking about. There is something charming about all his non sequiturs and the chimerical world they construct. He has a wry take on nationalism, traditional values, and democracy-building; it’s refreshing the way he is willing—excited, even—to take jabs at them.

But the thrust of the story is that the protagonist is mean to his sons and mean to his wife yet still feels sorry for himself for having to live in a world that doesn’t understand him. There’s the priest who badgers the wife into dutifully submitting to her husband’s sexual demands. The father whose lecherous glare makes the son hate him and, we’re supposed to believe, turns the son into a philanderer whose own licentiousness makes his sons hate him in turn. Balla relies on the hyperbole of increasingly cruel situations to let his reader in on the joke. You see, he doesn’t really believe these things; this is all in jest.

The problem is, it’s just not that funny. It’s a tired joke for a white man to make. I don’t believe Balla wanted to write a collection of chauvinist short stories, nor do I believe the Sherwoods set out to translate one. Those would be weird goals to have. That the sexism is tongue-in-cheek is undeniable, yet so is the fact that it is real and printed on the page. “Contagion,” the last story, is by far the best, and the only one that doesn’t include a male-female relationship. Not having a female character to deny agency allows Balla to shine in his absurdism.