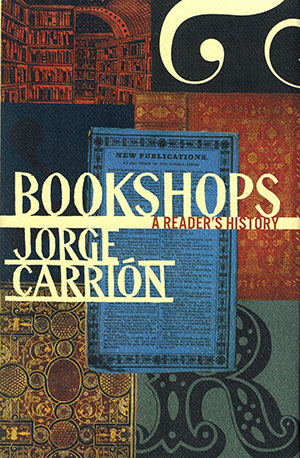 Jorge Carrión begins this paean to bookshops by writing: “Every bookshop is a condensed version of the world.” This axiomatic declaration is important as it establishes the metaphor around which the book is constructed, which Carrión expounds shortly after: “You need no passport to gain entry to the cartography of a bookshop, to its representation of the world—of the many worlds we call world—that is so much like a map, that sphere of freedom where times slows down and tourism turns into another kind of reading.”

The director of the master’s program in creative writing at Barcelona’s Universidad Pompeu Fabra, Carrión is the author of three novels as well as numerous travel books and collections of essays. Librerías, translated as Bookshops (the English edition carries the subtitle A Reader’s History, not present in the Spanish), was a finalist for the Anagrama Essay Prize in 2013. It is the first of Carrión’s books to be translated into English.

In the chapter “Bookshops Fated to Be Political,” Carrión moves between Hitler’s Germany to Cold War Berlin and, not surprisingly, to Cuba, to discuss the role bookshops have played in fomenting and propping up totalitarian regimes. As a frequent visitor to Havana, this was of particular interest to me. He writes: “It was in the Communist bookshop on calle Carlos III in Havana that future commander and repressor Fidel Castro bought the two key books in his life: The Communist Manifesto and The State and Revolution.” While the bookshops on calle Obispo remain (La Moderna Poesía, which dates to the nineteenth century, comes to mind), they have been reduced to little more than tourist spots whose sparsely stocked shelves sell official histories of the revolution and biographies of Che and Fidel.

Bookshops is translated ably by Peter Bush, a renowned translator of Catalan and Spanish literature, including works by authors as diverse as Spain’s Juan Goytisolo, Cuba’s Leonardo Padura, and Uruguay’s Juan Carlos Onetti. Bush’s translation is a delight to read, beginning with his decision to translate the title Librerías as Bookshops instead of “Bookstores” (Amazon is a bookstore, but it most certainly is not a bookshop). In the end, there is much to like in this book and translation and little to criticize. For the obvious bibliophiles and amateurs of world literature who are reading this review, it will be a welcome addition to their bookshelves.