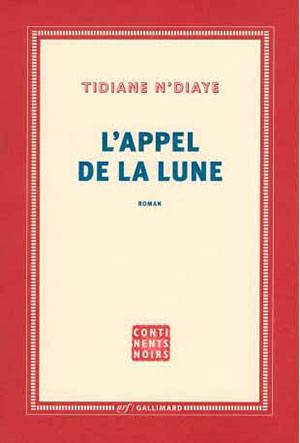 The Senegalese author Tidiane N’Diaye is known for such historical works as Le Génocide voilé (Gallimard, 2008) and Par-delà les ténèbres blanches (Gallimard, 2010). L’Appel de la lune, set in nineteenth-century South Africa before and during the Anglo-Zulu war of 1879, is his first novel. The “call of the moon” depicts a multiracial, though rarely tolerant, South Africa, before complete British military domination, and long before apartheid. This historical novel’s main plotline sets up a love story that is in some ways worthy of a fairy tale. The idealistic romance, however, develops against a backdrop of widespread and clearly depicted racial, religious, and generational strife.

Marc Jaubert, a descendant of exiled French Protestants whose family runs a vineyard, falls in love with the beautiful Zulu princess Isiban, whom he first glimpses as she dances alone at night, illuminated by the moonlight. This unlikely love story leads to an even unlikelier marriage, mediated by the couple’s respective grandfathers. N’Diaye’s background as a researcher often shows during the narrative, which includes succinct but frequent background information on Zulu social norms, British colonial policy, religious beliefs among the Boers, and the history of Protestantism in France. The expository historical digressions sometimes take precedence over the storytelling, but the author never loses sight of his narrative thread for long.

Around Isiban and Marc gravitates a cast of characters that N’Diaye has clearly sought to make as diverse and representative as possible. Isiban’s sister Pampatha disapproves of her marriage to a white man. Marc’s brother François similarly resents his brother for marrying a black woman. Kuzayo, the Zulu spy and translator, plays a vital role as intermediary between the extended families of the two lovers. A Boer family uses the Bible to justify its vicious racism. The aristocratic British army officers exhibit their own smug level of “civilizational” superiority.

By contrast, the small community of family, friends, and colleagues who gravitate around Isiban and Marc seem to prefigure the sort of multiracial community that is the stated goal of postapartheid South Africa (the novel ends with a call for “a true rainbow nation”). There is an unambiguously didactic element to this novel. The author wants his readers not only to learn about history but to learn from it, to understand the mistakes of the past and to avoid repeating them. That said, N’Diaye also knows how to tell good stories and how to tie various subplots together. This is an immensely readable and informative first novel.