The Silence That Remains by Ghassan Zaqtan 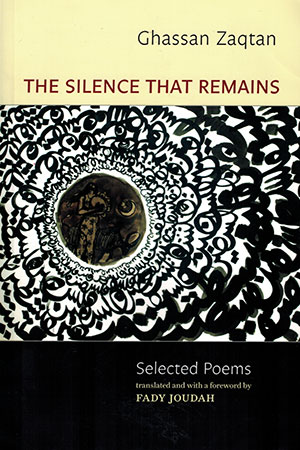 In the preface to Ghassan Zaqtan’s The Silence That Remains, translator Fady Joudah tells the reader: “To have memory and to articulate memory are two different things. . . . The more one attempts to capture memory and enunciate it, the more one is resigned to an endless task.” Zaqtan writes in the caesura between memory and recollection, endlessly cataloging imperfectly rendered experience in the poems of this fine collection, capably rendered and introduced to English readers by Joudah (see WLT, March 2016, 31–36).

Joudah describes Zaqtan as a kind of “art historian” of his own experience, and many of the spare poems of this collection engage memory in the manner of black-and-white photographs: they emphasize by shadow or absence; they frame what can be recollected, leaving plenty of room for that which remains outside the frame to speak. In “Their Absence,” Zaqtan writes, “And what remains / but little little / and their shirts / fabric that spreads on trees / and their shirts // banners that tug / only at trees // and are not retrieved.”

The poems of this collection are grounded in the quotidian—ashtrays, handkerchiefs, the timbre of a village accent “good for reading, singing, and seduction when I drink.” Emanating from these artifacts of dailiness, Zaqtan poses the question that best defines his poetics, captured in the epigraph to The Heroism of Things, which is included in this collection: “I’m mystified / how do I / rearrange the poem / everything’s been said.”

Joudah is especially successful at expressing the cadence of Zaqtan’s poems, re-creating their movement on the page for the English reader. This is vital since one of the features of the original Arabic that is necessarily lost to the English reader is the rich heritage of rhymes and echoes that river through the lines. In “Blindness,” for example, lines 1, 3, and 7, the first lines of their respective stanzas, end with a long ee sound, and lines 10 and 15, the last lines of the final two stanzas of the poems, both end in the long sound aan. While this does not follow any prescribed meter of Arabic poetry, it sets up a system of emphasis and echo that is central to the Arab reader’s experience of the poem. So too in the poem “We Are There,” where the poet scatters a handful of delicate rhymes throughout. Joudah’s translation manages these effects through cadence, pacing the lines with precision and opting for subtle consonance, conveying the intimacy of the speaker’s address: “This is what I say now that she’s taken everything / The things that only I see will stay behind: / the glimmer in our talk and the color of curtains / when she points to a boat in the dark // her hesitancy in bed / the smell of coffee in her heart and the burning incense.”

Joudah’s translation offers a window into a masterful poet’s oeuvre and enriches the English-language reader’s poetry library with poems of soft-spoken wonder and hard-edged silences.