Frankenstein in Baghdad by Ahmed Saadawi 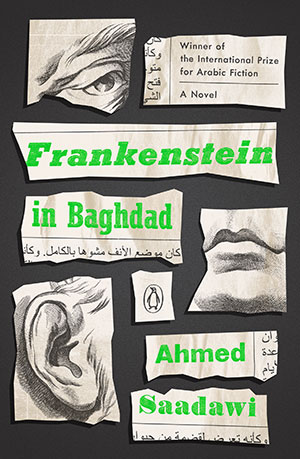 Winner of the International Prize for Arabic Fiction (the first Iraqi novel to do so), Frankenstein in Baghdad is a dark, surreal tale of a creature born of and nourished by a city tragically mired in violence and chaos. Saadawi draws us into what would otherwise seem like a magical-realist world of walking corpses, astrologers, and wandering souls; except that the daily car bombs, American soldiers, and missing family members have warped “reality” such that almost anything seems possible in Baghdad in 2005.

Like the stories in Iraq + 100 (Comma Press, 2016), Frankenstein in Baghdad explores the traumatic realities of a place in which death can come at any minute and families are torn apart. At the heart of this novel is Hadi the junk dealer, who gathers up body parts strewn across streets after suicide bombs and sews them together into one complete corpse that can receive a proper burial, thus providing those who lost those limbs the ability to find peace in the afterlife. But when a hotel security guard dies after a car bomb, his soul, searching for its (now shredded) body, enters that of the corpse, animating it and sending it on a mission of vengeance.

Caught up in the web of this “Whatsitsname’s” plans are Elishva, an elderly Christian woman who convinces herself that the creature is her missing son; Mahmoud, a reporter whose connection with his magazine’s powerful editor inducts him into the shady underworld of quasi-official bureaucracy; and the hotel owner, Abu Anmar, who loses nearly all of his patrons because of the bombs and then the creature’s revenge killings. It is when Mahmoud hears Hadi’s story about the creature and writes it up as a magazine article that the story spreads throughout the city, sowing fear on top of the terror that stalks the streets.

But as with any great literary work, this novel doesn’t just tell a story. Rather, it unfolds across multiple dimensions, each layer peeling back to reveal something new: the structure of the novel itself (stories within stories, references to the “author” as a character); buildings that, when damaged by bombs, reveal archaeological treasures; and identities that turn out merely to be covers for other (perhaps still false) identities.

Exquisitely translated by Jonathan Wright, this novel breaks through the superficial news stories and helps us see more clearly what the American invasion has wrought, how violence begets violence, and how tenuous is the line between innocence and guilt. Brilliant and horrifying, Frankenstein in Baghdad is essential reading.