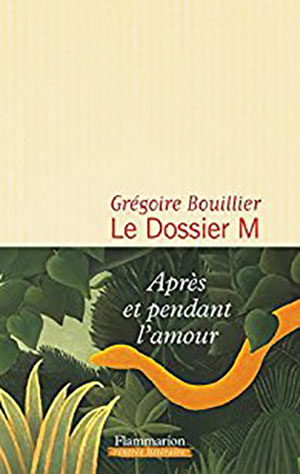 There’s something quirky, something darkly hilarious, about everything Grégoire Bouillier decides to set on the page. Not only are the scenarios he describes something out of a madman’s fantasy (his earlier The Mystery Guest revolved around being a plus-one at the famous artist Sophie Calle’s birthday party), but even words themselves are set spinning on the table (as in one moment during Report on Myself where misunderstanding the word “quarantine”—which also means “about forty” in French—leaves the narrator stuck in a forty-year-long holding pattern). Both of Bouillier’s early books were utterly strange yet deeply charming; they were brisk, hundred-page-long bubbles of French eccentricity. Then the man went silent for thirteen years.

Until this year. Perhaps the most striking thing about Le dossier M is its sheer size. At 880 pages and with rather imposing proportions, it’s easily one of the biggest books to be published in this fall’s flood of titles. Its title suggests a dossier or a file, but Bouillier’s book might also be considered an autopsy report; it describes the full arc of a romantic relationship, the ending of which is inextricable from the tragedy described at the book’s very beginning. M is a woman sixteen years younger than the writer, one who has seduced him completely: “M wasn’t just my type: she was also my style, standing there in front of me, incarnated.”

But the book doesn’t focus solely on their relationship; it owes its length to the many inventive digressions its writer inevitably slips into, even as M becomes increasingly ineffable and unattainable, a Beatrice made flesh. And yet the sheer energy of Bouillier’s passion, and his indefatigable ability to turn a word from a mere conveyance of information into the nucleus of a hilarious pun gives the book such an infectious energy that only the final page recalls to mind the book’s subtitle: Volume 1, After and During Love. There is little doubt that the S designating the beloved almost certainly refers to Sophie Calle, whom Bouillier dated in real life before she made art out of their breakup. Is this brick of a book his comeuppance? One hopes the second volume, After and Well Before Love, will grant all the answers.