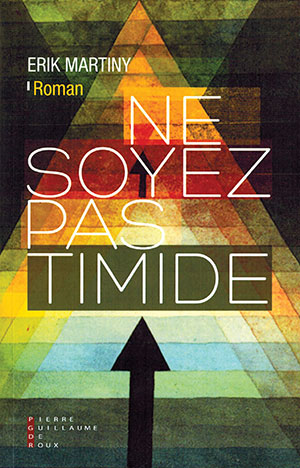 After a novel written in English, The Pleasures of Queuing (2018), Erik Martiny has produced a French-language novel that is somewhat similar in terms of its grotesquely comic tone. The apparent protagonist and narrator of Ne soyez pas timide (Don’t be shy) is a fifty-year-old high school teacher who has an affair with one of his teenage students. However, this initial storyline is quickly overtaken by a subplot that grows to the point of filling most of the novel and brings the reader back to the Paris (and, more surprisingly, Thailand) of the interwar years.

The writer and director Jean Cocteau takes center stage during much of the oversized subplot, initiating a young and very shy narrator into a world of drugs (mostly opium), sex, and bizarre social experiments (including living as a panhandler), all of which is presumably designed to shatter the narrator’s bourgeois inhibitions and guide him, however harshly and awkwardly, toward his emergence as a full-fledged writer. The middle-aged Cocteau as a literary mentor and sexual initiator to inexperienced young men is more than plausible. The rest of the novel is an exercise in Rabelaisian humor, alternating between learned disquisitions and outlandishly disgusting sexual and/or scatological encounters.

Martiny lives in France and teaches British and American literature. Unsurprisingly, his novel is full of references and allusions to writers, such as Guillaume Apollinaire, Alexandre Dumas, Victor Hugo, Franz Kafka, and Vladimir Nabokov. Greek mythology is also referenced through a character named Tirésias. As for the second narrator, his ludicrous name is Thomas Corbillard (hearse). The linguistic profusion favored by the author regularly overtakes any notion of narrative continuity. Seemingly intent on providing advance warning as to his literary methods and objectives, the narrator often appeals directly to the reader: “Don’t hold it against me when I resort to puns, to digressions”; “if you only appreciate friendly and admirable characters, stop reading this book.” The title of the novel itself can be seen as an admonishment to readers, who are called upon to transcend their shyness and immerse themselves in this raunchy, profane version of a bildungsroman.