Night of the Long Goodbyes by Erik Martiny 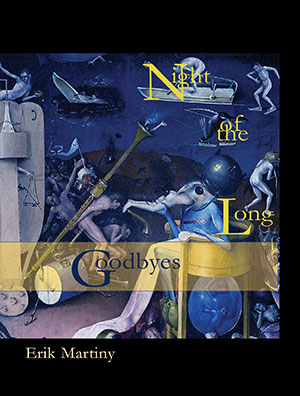 THIS NOVEL OF ANTICIPATION is set in Great Britain in the middle years of the twenty-first century, but by virtue of the heady mix of politics and plague that it puts on offer, it seems very timely indeed.

Its narrator is a man named Kvist Kerrigan. Having abandoned an academic career in favor of journalism, he is now afflicted by an acute case of graphomania. We understand that his complaint is merely a very local symptom of the far vaster social afflictions that he has witnessed: the Night of the Long Goodbyes, for example, also known as the Great Purge, which entailed the overnight deportation of every Briton whose ancestors arrived after 1870. A year thereafter, the powers in place decided that LGBTs should be sent to internment camps in the Hebrides. “And then, as if these political calamities and all that followed in their wake wasn’t enough to shatter faith in the perfectibility of human beings, we were treated to the analgesia and anhedonia pandemics.”

Yet all those crimes and catastrophes seem as nothing when compared to the Blue, a disease of the earth itself whose origin is unfathomable and whose consequences are inescapable. When Kvist sets out on a bicycle trip to chronicle the Blue, many readers will be reminded of Samuel Beckett’s Molloy. Beckett is one of the ghosts who haunts Martiny’s novel, and his influence serves to leaven the unremitting grimness of Kvist’s account of things. Other ghosts flit through these pages, most notably Albert Camus and Franz Kafka, whom Martiny enlists in his description of Kvist’s Sisyphean efforts to locate the truth of the Blue. When Kvist encounters a tramp named Hermann Gobb-Rillen, who had authored a novel entitled The Erasers, it becomes clear that Alain Robbe-Grillet is one of those ghosts, too, and that he has in a sense furnished a map for Kvist’s wanderings.

In short, if Martiny is patently concerned with incendiary politics and natural cataclysm, he is also interested in how the human mind comes to terms with those phenomena, whose dimensions beggar the imagination, and it is that feature of his novel which seems especially opportune right now.