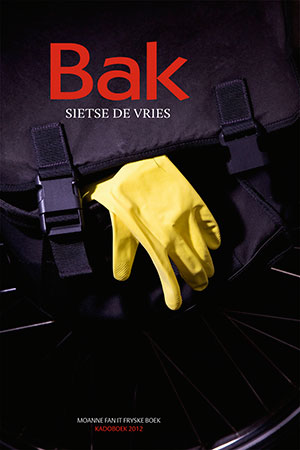 In this slim novel, Sietse de Vries continues to play with variations on the crime-novel formula. In Kugels foar Kant (see WLT, Oct. 2003, 126), the detective in search of the murderer is himself murdered. In Potstro Fongers (see WLT, Mar. 2010, 62), neither the motive for the crime nor its perpetrator is ever discovered. In Bak, the reader knows both the motive and the perpetrator from the start, but the police and the public remain in the dark.

Obviously, the author is playing with the reader as well. Here the tension is not so much whether the guilty will be discovered as it is when and how. The guilty one in this case is Sherp Bak, who has little to show for his fifty years of life. Bak has been an underachiever since childhood, now stuck in an undistinguished twenty-year career as a newspaper reporter. More or less accepting of his unremarkable life, he cannot, however, tolerate others’ view of him as a loser. Thus when Remco Beets, an arrogant city councilman, half drunk, begins to assault him with physical and verbal abuse, Bak fights back. When Beets tells him that he’s the laughingstock of Frisian journalism and contemptuously spits in his face, it triggers a violent rage that makes him grab Beets’s head and bang it against the floor so hard and often that it kills his antagonist.

Deftly, Bak clears the scene of all criminal evidence, and deftly De Vries turns his killer-reporter into a journalist assigned to the murder case. Ironically, Bak gains public stature as he manages to “discover” background details that point to possible mafia involvement. De Vries fools the reader, who expects that surely this time Bak will be unmasked. Instead, the police, impressed by Bak’s sleuthing ability, recruit him as their chief assistant in the expanding criminal investigation.

No doubt De Vries is aware that he’s straining the reader’s credulity, an otherwise serious flaw in a detective novel. An underachieving reporter who turns into a star by becoming a killer and a betrayer of his profession without raising the suspicion of colleagues or police may make for delicious irony but hardly for a challenging engagement by the serious reader of crime novels. For the appreciative reader of Sietse de Vries, however, the treat of an entertaining page-turner is enough.