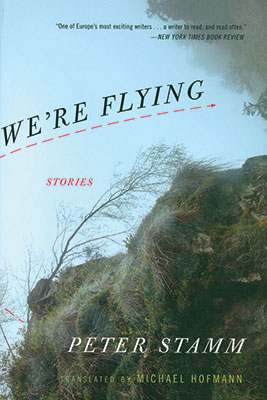 Critically acclaimed throughout European literary circles, Swiss author Peter Stamm achieved his breakthrough in the United States with the translation of his novel Seven Years in 2011. In We’re Flying, an anthology of two collections of short stories originally published in 2008 and 2011, Stamm presents a wide range of “everyday” characters from Swiss life to thematize loss, confusion, banality, and anxiety. With a minimalist prose, attention to detail, and a focus on internal struggles instead of external conflicts, Stamm has been compared to Raymond Carver, Ernest Hemingway, Albert Camus, and Franz Kafka.

Stamm’s stories present the reader an almost voyeuristic gaze into the lives of characters to reveal contrasts of hope and disillusion, acceptance and rejection, failure and success, and bleakness and humanity. In “Children of God,” a minister falls in love with a young girl who becomes pregnant; “The Suitcase” portrays an elderly man with his comatose wife in the hospital; and “Sweet Dreams” is about a young couple forced to move back to their parents’ house. In “Years Later,” Wechsler relocates to his boyhood village after a failed marriage, only to be overcome with an even more profound sense of loss and change. In an interview with the New Yorker, Stamm said, “All literary characters are inventions, even if they are based on real people. But we don’t really like to be reminded of this fact. We have to forget it to be able to enjoy reading at all.” But despite a desire for critical distance, readers are constantly reminded of themselves by the characters’ emotions, reactions, and gestures. The stories present no real actions; rather, they portray the characters’ psychological dilemmas. At times, the reader may feel ashamed, embarrassed, or even guilty for having been granted a glimpse into the protagonists’ inner psyches.

While revealing the limits of our existence, knowledge, and language, the stories are simultaneously haunting and uplifting. A master storyteller, Stamm succeeds in stripping away layers of superficiality to uncover the complicated daily psychological struggle of the average person. Michael Hofmann, award-winning translator of Kafka, Joseph Roth, and many others, deserves credit for his emotionally taut translation of the volume from German into English.