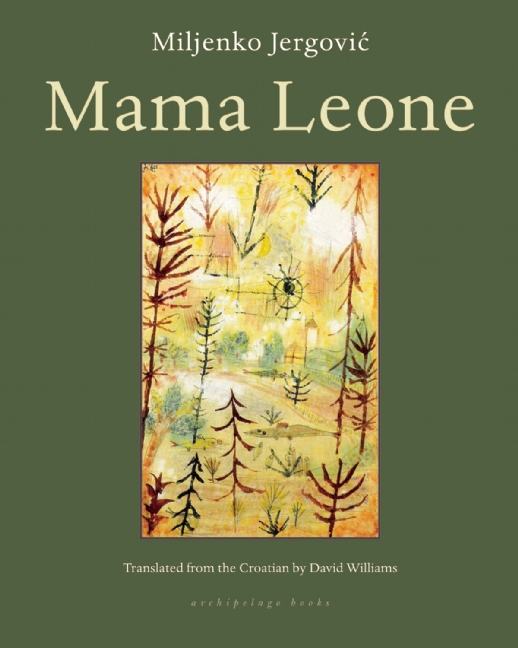 Mama Leone, by Miljenko Jergović (b. 1966), has an interesting structure: the first part of the book, “When I Was Born a Dog Started Barking in the Hall of the Maternity Ward,” is a novella narrated from the first-person perspective, while the second part, ”It Was Then a Childhood Story Ended,” is composed of twelve short stories written by an omniscent narrator. This structure, consequently, divides the book into two thematic and temporal segments. The opening section is located in Sarajevo, the narrator’s hometown, and Drvenik, a Croatian village on the Adriatic where the narrator spends his formative years in the 1970s and 1980s. The stories, on the other hand, are set all over the world and the former Yugoslavia, after Bosnian refugees escaped from the war in the 1990s in an attempt to start a new life. Unlike the novella, the stories are not unified by the narrator; instead, their subject and somewhat typified characters—disillusioned, unadjusted, and heartbroken exiles—bring the stories together.

“When I Was Born” is, actually, arranged as a series of twenty-one vignettes, the most memorable moments of narrator Miljenko’s childhood that recall the bildungsroman, and whose great humor and skewed logic stem from the narrator’s age. In all of the vignettes but the last, which gives the book its title, the narrator’s viewpoint is of a precocious, observant child who not only successfully navigates his parents’ complicated relationship, unusual living arrangements, colorful family members, and problems at school but also deeply comprehends life. Death, introduced in the first segment in which the narrator describes his birth, is both the novella’s recurring theme and the obsession of Miljenko’s childhood: “Relatively early on, when I was five or six, I came to the conclusion that everything connected with death sucked pretty bad and so decided to shelve my threats of dying, at least until I solved the problem of God’s existence.” The deaths of his grandfather, dog, and a young cousin—to name just a few—force the narrator to face his own mortality and, paradoxically, form his own identity. This mixture of a child’s perspective and language, as well as the fascination with death, makes “When I Was Born” a multilayered and complex text, which demonstrates why Jergović is one of the most prominent Croatian authors and one of the most translated European writers.