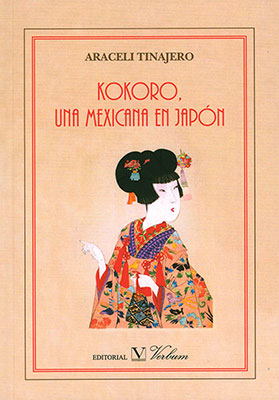 Kokoro, una mexicana en Japón is a memoir that relates various trips to Japan that Araceli Tinajero made during the 1980s. Tinajero expresses what she saw, experienced, and learned about herself, her Mexican culture, and the traditional and contemporary way of Japanese life in a bittersweet manner.

Valuable for its bicultural content and flavor, the book entertains with the details of lives in the two different cultures: Mexican and Japanese. Kokoro, una mexicana en Japón shows how people are basically just people no matter where they live or from which background they come. The common denominator for all of us is our willingness to reach toward one another in camaraderie. This intriguing read covers various years during the 1980s and presents Japan as a changing and changed society from the post–World War II era into a more contemporary time. As a document of social criticism, Tinajero also details the discrimination and marginalization of ethnic groups within Japan and examines inequality in 1980s Japan.

The traditional styles of dress, food varieties, idiosyncrasies of work, sports fanaticism, gang loyalties, the minutiae of sūmo, the intricate and efficient workings of the Japanese train system, and the delicacies of the social customs inherent to Japan are all described in sensitive language and in minute detail. The comparisons Tinajero makes to similar/dissimilar customs and traditions in Mexico are enlightening, as is her examination of the close relationship between Japanese and Mexican fine arts and literary endeavors, which make up two of the final chapters of the book.

Although Kokoro is not a novel but rather a cultural Baedeker, it maintains the reader’s interest and attention throughout. According to Tinajero, the Japanese word kokoro translates as the heart or soul of a person, and in this book Tinajero exhibits both elements in poignant fashion, especially when she writes about the 2008 death of one of her closest friends during the 1980s, Kimiko. The reader empathizes with the author, who describes her somber return to Japan to visit Kimiko’s grave.

The only discordant note in the book is the insertion of two chapters, toward the end, which offer lists of writers, artists, sculptors, and collectors of Mexican folkloric costumes, with detailed explanations that are of interest but not pertinent to the overall tone of the memoir. For a student of Japanese and/or Mexican cultural studies, these chapters could be relevant, but for the reader of Kokoro, una mexicana en Japón whose primary focus is on the memoir of a Mexican living in Japan, these two chapters seem somewhat out of place.