What Light Can Do: Essays on Art, Imagination, and the Natural World by Robert Hass 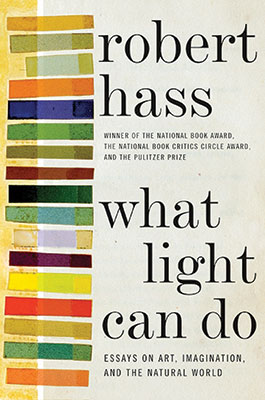 The nouns in the subtitle of Robert Hass’s new book are abstract enough to cover the wide variety of its topics, but they barely suggest the range of allusion, the depth of some of the readings, the consistent eloquence and easy confidence of the style, and the author’s ability to blend personal and critical viewpoints.

For example, the first essay, on Wallace Stevens, is not just a reading of a poem but a history of the reader’s relationship with that poem from his first encounter with it at the age of nineteen through his response, twenty-five years later, as a mature poet and master technician.

This concentration on the physical and psychological circumstances of the moment, which may be indebted to the type of prayer called “composition of place” in the Spiritual Exercises of Ignatius of Loyola, informs much of the book. The attention to detail allows Hass to fix on moments, like those in Chekhov “when you catch him in the act of being a great writer.” Or to explain a good deal about Czesław Miłosz in terms of his origin in Polish-controlled Lithuania. Or the context in which Howl was received.

One surprising result is that the more one knows, or thinks one knows, about the subject, the more one can learn from Hass, who writes: “One of the gifts people who teach can give to students is a sense of complexity, because desire tends to simplify what it sees.” This is from the final essay, on the controversial cutting down of a grove of trees on the Berkeley campus, which opens layers upon layers of complexity—biographical, biological, horticultural, political, geological—and laments less the disappearance of the trees than the opportunities to discuss the multilayered issues surrounding the event.

Throughout the book, single sentences offer moments of illumination, as in his view that the western “was always a sort of American Protestant morality tale, a Pilgrim’s Progress, made out of simple virtues and simple tests,” or that Catholics “are tellers of stories and enumerators of lists . . . rather than readers of Scripture.” Anyone familiar with either subject will not only recognize the accuracy of the statements but should be able to use them to develop one’s own arguments.

Sometimes the eloquence, confidence, and brief insights serve to gloss over structural problems in longer essays, like those on Louis Zukovsky, families and prisons, and the epistles of John. Each contains much of value, but the organizational principle is not always clear.

Even less clear are the photographs used to illustrate Hass’s essays on photographers of the American West. His prose is quite lucid, but Ecco Press has used the cheapest possible method of reproduction, including black-and-white renderings of color photographs, so that the reader/viewer must take Hass’s judgments with a good deal of faith. Still, Hass is a consistently illuminating guide and a masterful reader of poems, photographs, and situations.