Journeys on the Silk Road by Joyce Morgan & Conrad Walters 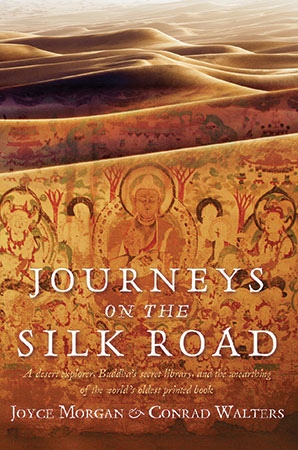 The first impression the reader takes away from this tale of the recovery and preservation of the world’s oldest known printed book—a woodcut copy of the Buddhist text of the Diamond Sutra dating from 868 CE—is one of the exhaustive and exhausting research that must have gone into its making. The extent of this work, which began in earnest in 2005 but was inspired much earlier, is recognized in the book’s acknowledgments section as well as its scholarly apparatus: endnotes, select bibliography, and an enormously helpful index. But it’s also revealed in every chapter and in the minute details out of which this story is built, right down to the history of its central character’s “dynasty” of fox terriers, all named Dash.

The book traces the adventures of the intrepid explorer and archaeologist Aurel Stein who, without knowing what he had, in the early twentieth century retrieved the Diamond Sutra from one of the Caves of the Thousand Buddhas, where it had resided for more than a millennium. This document, along with the many other scrolls once housed there, would subsequently help scholars to understand the knowledge, ideas, religions, and cultures that were disseminated along the ancient northern and southern routes of the Silk Road between China and Central Asia, around the forbidding Taklamakan Desert, and finally to the Mediterranean. But many perils attended the documents’ retrieval, transportation to the West, and preservation even through the London Blitz, and Morgan and Walters do an excellent job of making these threats and challenges come vividly alive for readers by keeping the focus on the persons and personalities most centrally involved.

Still, the book is not most importantly an adventure story, or an explication of a vital Buddhist text, although it is these things, too. Rather, it seems to me an inspired musing on and demonstration of the centrality of the written word to global history and culture and the importance of its ongoing existence. Thus the book ends with its authors asking, “Will the printed book go the way of cassette tapes, video recorders, pay phones, and typewriters?” and observing warily that “so many vital elements in the life story of the Diamond Sutra—printing, libraries, reading, even the use of paper—are undergoing profound change.” Although this copy of the Diamond Sutra admonishes us that all is impermanent, the longevity of its influence and even its physical endurance warn us against too quickly putting aside the past and moving on. Morgan and Walters, whose research obliged them to consult most of the means by which human thought and its expression have been preserved through history, would doubtless second this caution.