Roads to Berlin: Detours and Riddles in the Lands and the History of Germany by Cees Nooteboom 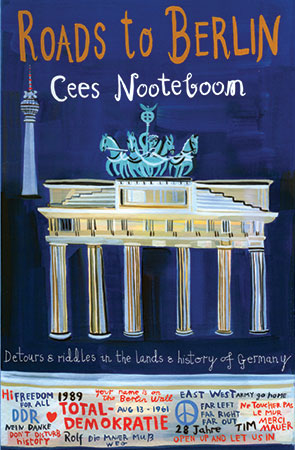 Because of his long experience with the city and his outsider perspective on Germany, Dutch writer Cees Nooteboom is able to offer us some trenchant insights into the history of the formerly divided cities, divided countries, and the new united one. Nooteboom made his first visit to Berlin in 1963 and was there for that propitious moment in 1989 “when everything changed,” as nicely depicted in his novel All Souls’ Day (see WLT, Spring 2002, 206).

Of the earlier years, Nooteboom recalls the eerie feeling of leaving West Berlin on a highway at a time when he was not allowed to leave Berlin under any circumstances: one was, after all, driving out of a cage that housed a few million free people. In the surrounding countryside, everything smelled different and looked “browner” (the result of the coal that was used to power everything).

Following the demise of the Wall, Nooteboom listens to discussions regarding unification: those who advocated immediate unification were accused of “D-Mark nationalism,” while those who favored a more gradual process were labeled “constitutional patriots.” As he rightly observes, this was an idle, “intellectual” debate because people’s real concern was whether there would be jobs or not. He is equally right that a drawn-out discussion would only have exacerbated whatever dissonances and conflicts there were, and we might still be discussing it all today.

Of all of Berlin’s “history lessons,” the one Nooteboom found most “effective and affecting” is Daniel Libeskind’s Jewish museum, which depicts “the present absence” “like a heart attack turned to stone.” Having been to the museum myself, I can say that the experience of it could hardly be better stated. But there’s a lighter side, too, to the new, open city: now the “lonely Trabants” can at least “dream of hot Mercedes.”

What has so fascinated him about this city, he explains in a little autobiographical note, is that in Berlin “on an infinitely larger scale, and with horrifying consequences for the fates of so many people, somehow the same has happened [to Berlin] as happened to me.” Born in 1933, he grew up during the war when the Germans attacked his country, when his father died in a British bombing raid, and during its aftermath, which resulted in massive evacuations and downright starvation. He and Berlin do not lack for history, and as far as the city is concerned, even with all that’s been destroyed or forgotten, he is right that, if anything, an excess of history remains today.