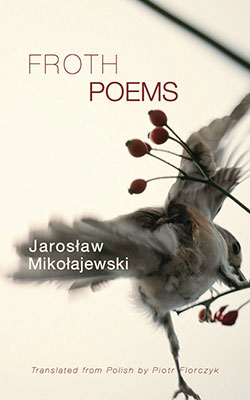 Although Jarosław Mikołajewski’s poetry debuted in Poland in the 1990s, he has eluded American readers until now. In Froth, an English translation of the Polish by Piotr Florczyk, readers can witness the intimate absurdities of Mikołajewski’s life: his wife’s spine, his daughters’ playtime rituals, his father’s casket built from cardboard, or the yellow froth that lurks after he showers. Froth is full of surprise, sudden endings and clever wordplay, and it moves readers to answer Mikołajewski’s many questions.

The extended metaphor is one of Mikołajewski’s strengths. In “My Wife’s Spine,” for instance, eight stirring stanza-length metaphors outline the subject of the title, as if readers are trailing the spine while moving down the page. Momentarily, her spine is “the zipper in a suitcase / that won’t close, even under a knee.” Next, it is “a bunch of frightened kids / who broke the kindergarten’s piano,” and later, it is the keyboard from that piano.

The poet, a professor of Italian literature and translator from Italian into Polish, expectedly addresses language and culture in his work. In “Area aerea,” the speaker sits at the airport, “playing with language,” observing how the same words sound in different tongues: “‘aeroporto’ and ‘areoporto,’” he says, wondering, “does only one of these have the right / to launch aeroplanes // or is it all the same to pilots.”

In “bethlehem,” Mikołajewski opens with a stunning first line: “liking myself is not my thing.” This sentiment travels throughout his collection: in “at the intersection,” he wonders what street beggars think of him—and even worse—what they might do to him, as he drives by in his car; in “A love confession to my wife who together with our children is about to travel by plane,” the title a poem in itself, he painfully visualizes his daughters and wife crashing while he sits at home; finally, in the concise and alarming “Anxieties,” he imagines a thief lurking after his brother and “osteoporosis hallowing [his] mother’s bones,” while “nothing lies in ambush for [him].”

Froth is a mixture of short, striking poems and long, meditative pieces, both equally interesting in their own right. Because his poems are personal yet universal, readers will absorb a sliver of Mikołajewski’s life while also learning about themselves.