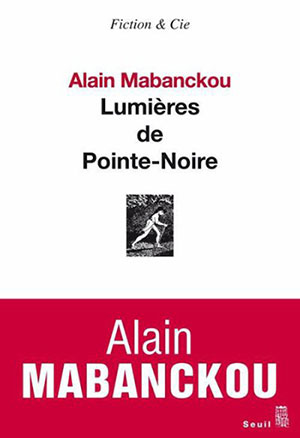 Alain Mabanckou is one of the most widely read and discussed African writers today. After publishing a number of well-received novels and winning several prizes, he has recently turned increasingly to autobiographical essays. His Le Sanglot de L’Homme Noir, also published in 2012, tells of his years as a student in France and of his career as a teacher of francophone African literature at UCLA. He reflects on what it means to be black in the modern world and realizes that culture and language are essential parts of his identity.

In Lumières de Pointe-Noire (the coastal economic capital of Congo, where he was born), Mabanckou recounts his first visit to his native land since he left in 1989. His memories and new experiences are told in a series of short chapters, interspersed with photographs. He writes of himself as a child who remembers the myth of the old woman in the moon. His memories include early childhood games, his invented story that his two sisters (who died before his birth) are still alive, his respect for his other “father,” the man his mother shared with another woman after she was deserted by Alain’s own father and who takes great pride in his position as receptionist at a colonial hotel. He tells of trying to read all the books in the library of the French Cultural Center in alphabetical order.

If he depicts himself as this child, Mabanckou is also a well-known celebrity among his family and those he meets. They see him as a man of the world, who lives near “Hollywood,” who has appeared on television. Some of his relatives are greedy, expecting gifts of money from him. Others, such as an aging grandmother, Hélène, welcome the presence of the French woman who accompanies Alain, seeing her as the white woman whose appearance will allow Hélène to die.

Lumières de Pointe-Noire is also a reflection on the myths of contemporary society. Many people are still afraid of being photographed. When twins are born, the female is considered the more powerful. Mabanckou’s uncle, who took him hunting one night when he was a child, believes that the stag and doe they saw are the incarnations of their grandparents and that the boy must promise never to eat the meat of these animals. Albinos are considered failed Europeans and sometimes killed, to be dropped in the sea where they can return to Europe.

Mabanckou also describes how the society he knew has changed. The cinema, where youth imbibed the myths of modern culture, has become a Pentecostal temple. The lycée where he studied has been named for a colonial ruler. Quarrels in the prostitutes’ quarter are between the local girls and the immigrants from what is still known as Zaire. Children in Pointe-Noire, however, in spite of their poverty, are happier than Africans who have escaped to France and cannot find their role in society.

Lumières de Pointe-Noire is a mixture of observations, often expressing the author’s own ambiguity about his place in the modern world.