Winter: Five Windows on the Season by Adam Gopnik 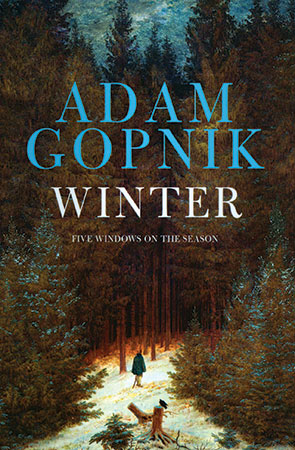 Anyone who has written scholarly articles will rightly revere someone who has read so widely and carries learning so gracefully. To have pushed through thickets of academic prose and emerged without a scratchy style is a testament to the author’s character. Sporting an impressive bibliography and thorough index, Adam Gopnik’s Winter is both lively and accessible.

Five essays (“windows”) set up the different ways we view or engage with winter: Romantic Winter, Radical, Recuperative, and Recreational, with a reflective summary entitled “Remembering Winter.” Romantic Winter features nineteenth-century depictions of winter in the arts, first as compared with earlier depictions and then as subsequent composers, artists, writers, and celebrants modify them. “Radical Winter” is the long or even endless winter of the north and far south, and the essay of that title features the expeditions to reach the North and South Poles through the memoirs of the participants. In many ways, the most interesting essay focuses on the recuperative or restorative themes that emerge through winter celebrations, especially Christmas and the carols, fiction, poetry, music, and commercialism that cluster around that holiday. Gopnik almost rescues my interest in Dickens’s “Christmas Carol” in this chapter. Skating, sledding, and especially ice hockey—Gopnik is Canadian—are featured in “Recreational Winter.”

In each essay, defining the perspective is primary, with a background leading up to selected examples of that perspective. Extension is geographic rather than chronological, as Gopnik distinguishes among European, British, and North American versions of the same perspective.

An academic reader may miss the page-by-page footnoting or endnoting. More importantly, such a reader may want more examples, a more detailed history of the development of each perspective on winter—particularly those examples that would suggest the extent to which the perspective entered popular culture. But those concessions to a general readership, as well as slim references to secondary sources in the body of the book, make for an unencumbered enjoyment of the flow of ideas and themes. This academic reviewer regrets only the inability to credit Gopnik for those ideas and connections that are his alone. Except, that is, in “Recreational Winter,” where the author-as-fan—and fan-as-fanatic—perhaps too lovingly dissects and theorizes Canada’s national sport. In so doing, he loses the context of the winter environment present in his other essays.

Gopnik concludes by focusing on the progressive distancing of winter in our time. Controlled indoor environments and global warming mark a retreat of winter as a significant experience for many. It is remembered in the paintings, literature, and movies for what it was—in Citizen Kane or in Nick Carraway’s memories in The Great Gatsby. We are undergoing what he calls a “numbing of feeling” toward winter, an interesting choice of words for any reader who’s spent time in subzero weather. Regardless, Winter deserves a place in that short shelf of works that successfully stimulate a desire to renew our attenuated relationship with the natural environment.