Every Day, Every Hour by Nataša Dragnić 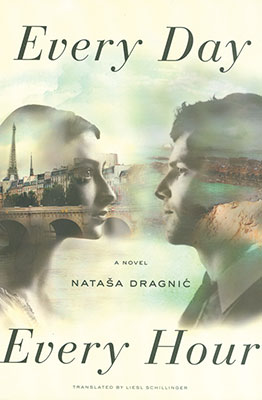 Readers and foreign presses have embraced Every Day, Every Hour as an enchanting first novel. Alas, however, its fairy-tale romance collapses under the weight of stylistic and structural contrivance.

The novel follows its ill-fated protagonists, Luka and Dora, from their births in a small coastal Croatian town until they reach forty-nine and forty-six, respectively. Aspiring artist Luka, five, and aspiring actress Dora, two (!), meet in kindergarten: Luka faints, Dora revives her “prince,” and voilà—inseparable soul mates. But Dora’s move to Paris with her parents four years later creates a void in Luka’s life and a powerful memory the younger Dora cannot access.

Both mature: Luka turns pain into art in Zagreb while Dora, always “full of voices,” conquers the Parisian stage. Meeting accidentally at Luka’s first Parisian art show, they consummate their childhood love. But upon Luka’s return home to arrange their wedding, his Zagreb girlfriend, Klara, uses pregnancy to trap him in a wretched marriage, and he trades art for hotel work. The lovers’ lives thereafter intersect only at inopportune moments, assuring that love is repeatedly found and lost.

The structure foreshadows and underscores their heartache. Their last meeting opens the novel, as Dora reveals that she has recently married and that her teenaged, budding-artist son is Luka’s. The penultimate chapter repeats that first scene verbatim, and the final chapter ends with their mantra—“What do we do now?” “Let’s get out of here.” But even though fate has given Luka an exit—he has learned that he did not father his first child with Klara—Dora is now married.

One initially suspends disbelief, accepting Dora’s improbable precocity, Luka’s repeated faints, and Dragnić’s mirroring technique (e.g., at the moment Luke is wounded during the siege of Dubrovnik, Dora “wakes with a faint cry” in Paris) as traits of the genre—fairy-tale romance cum magic realism. But plot structures, passages, and pages repeat throughout the text. Thus, whenever they meet, Luka faints, Dora revives him and calls him her “prince,” and both think “I will love you, only you, always you, my whole life long—you are my breath, my heartbeat, etc.” Chronically passive, Luka, less Prince Charming than Sleeping Beauty, twice tells Dora, “I was weak,” and when he twice returns to Makarska, “the bus enters the city, and if Luka’s eyes were open, he would see the bus station. And Klara.” Such self-referential motifs telegraph plot and emotion but lack thematic richness. Straining credulity, they move the novel closer to burlesque than to tragedy.

Every Day, Every Hour aims high: its final scene leaves the protagonists “like two tragic characters in a Shakespeare play. Like two lost children. Against the backdrop of nature’s power.” But when one (which is unclear) asks, “Do you know what this whole story amounts to?” the other answers, “A history of the countless pregnancies that changed the world.” That “world” only their own, these narcissists lack the depth of tragic figures. Though it promises a haunting romance, the novel more resembles Nicholas Sparks than Shakespeare.