Ask Me: One Hundred Essential Poems by William Stafford 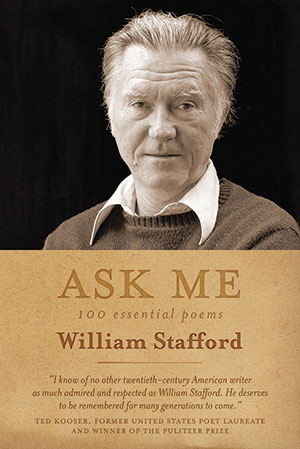 This book ought to be called “One Hundred Quintessential Poems.” Any reader previously unfamiliar with William Stafford’s poetry—if such a reader could be found—could not help but be mesmerized by this sequence, its sustained excellence, its deep and authentic voice of interiority. The many sides to Stafford’s poetry—meditation, humor, protest, elegy, celebration, compassion, insight, empathy, intimacy, witness, and others—are all represented in this volume. If I started illustrating this by quoting the brilliant passages that manifest these sides, the quoted passages might be as long as the book.

It has been said that Stafford published too much, over sixty books of poetry. His habit of writing in the early morning every day yielded a great deal of poetry, and Stafford himself was reluctant to unleash the critical eye that would categorize some poems as unworthy for fear it might inhibit his fluency when writing; consequently, many poems were published that, though perhaps competent, did nothing to strengthen the volumes in which they appeared. The result was sometimes a diluted effect of what is otherwise a stunning number of truly first-rate poems. This new volume concentrates those first-rate poems to magnificent effect and makes us want to search again those other sixty volumes to experience certain poems and brilliant passages necessarily left out of this collection.

Stafford’s poetry never feels rushed, predetermined, or inauthentic in any way. Insights come when they come (“bonuses” he would call them); alertness, thoughtfulness, and compassion are always there. Perhaps because of his habit of writing when most everyone else was sleeping, his work sometimes has a dreamscape quality, a whispered interiority; other times, but also in the quiet speech of early morning, his work exhibits a calm conversational patience, an earnestness, and a vulnerability captured in the famous lines from “Ask Me”: “Some time when the river is ice ask me / mistakes I have made. Ask me whether / what I have done is my life.”

For another example, his ability to enter imaginatively into the circumstances of others is no better illustrated than in the elegy titled “Bess,” a poem about a woman with cancer: “In the last year of her life / she had to keep her friends from knowing / how happy they were. She listened while they / complained about food or work or the weather. / And the great national events danced / their grotesque, fake importance. Always // Pain moved where she moved . . . but she remembered / where joy used to live. She straightened its flowers; she did not weep when she passed its houses; / and when finally she pulled into a tiny corner / and slipped from pain, her hand opened / again, and the streets opened, and she wished all well.”

There is so much more to be said, but readers should just enter into this amazing new collection as soon as they can and step into its deep space of recognition and meaning, warming themselves by the hearth of Stafford’s voice.