The Matiushin Case by Oleg Pavlov 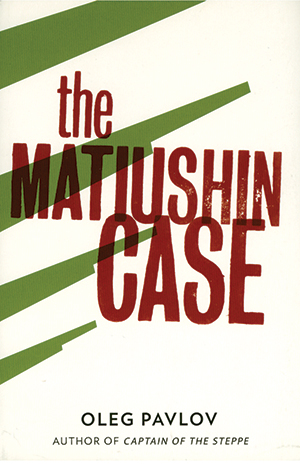 In his novel The Matiushin Case, author Oleg Pavlov delves deep into the psyche of a troubled young man during the last years of the Soviet Union. The book explores trauma, fear, and belonging against the backdrop of a military family and the Soviet war in Afghanistan. Full of dark humor and dark characters, this book, while not for the faint of heart, is nevertheless an intriguing view into a life that experiences much pain and hardship with very little that is positive or beautiful to relieve its characters of the cruelty of their world.

Pavlov’s main character, Vasilii Grigori-evich Matiushin, is one of the most interesting, if not necessarily likable, aspects of the novel. He has difficulty feeling most emotions, yet contrary to what one might expect, this makes both his early life and his time in the Soviet army difficult. Fear seems to be one of the only emotions Matiushin can feel, and it is this particular emotion that the book spends most of its time dwelling on and examining. All of the book’s humor is black humor, which certainly fits the overall tone, but with the consequence that sometimes it’s difficult to tell if certain lines or events are meant to be humorous or serious.

The rest of the characters, though many recur frequently, are less well developed and suffer for it. They are largely unknowns and seem to exist mostly for the purpose of complicating Matiushin’s life. The exceptions are Matiushin’s family members, who have a fair amount of their personality and history revealed at the beginning of the book. However, the main focus of the novel is not on characters but on mental states. Pavlov uses the darkness and alienation his main character deals with to reveal the struggles of a country that is both engaged in a difficult war and nearing its collapse. The characters, while not entirely fleshed out, all serve to advance this key concept.

The dark, emotionally haunted narrative that Pavlov weaves in The Matiushin Case is one that seeks to show the resilience of those who experience intense turmoil and upset in their lives and yet manage to survive. Although the ending feels a bit unsatisfying due to lack of any real closure, the novel is notable for the unusual protagonist, the exploration of fear, and the intense examination of an unsettled period in Russian history.