Darkness Sticks to Everything by Tom Hennen 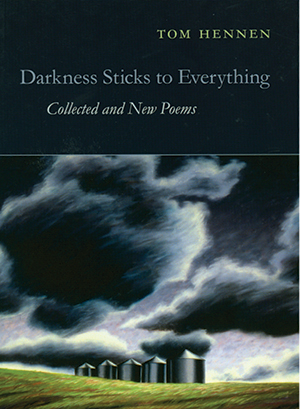 Tom Hennen’s newest book is a new-and-collected volume, including poems from 1974 to the present, showing that Hennen has been quietly among us all these years with relatively little celebrity. How is that possible with poems as luminous as many of these are? It might have something to do with Hennen’s apparent disinterest in the preoccupations and obsessions of his time, the many –isms and causes (just and otherwise) that seem to dominate more “popular” poetry. He seems never to have heard of postmodernism, or even modernism, never to have heard of the social and political upheavals of the last forty years. His poems seem deeply immersed in the immense solitude of the American Midwest, not lonely and trying desperately to escape but, in fact, immersed, focused, witnessing, perceiving, shaping. One could compare this poetry to that of Kooser, Bly, Tu Fu, even James Wright, but one would only be naming poetic kin.

Hennen has his own unique quietude, a kind of American Midwest hybridization of the main sensibilities of Zen Buddhist and Taoist poetry. He seems interested primarily in giving shape to precise feelings, for example: “All through the night / When the woods come close / You can hear them breathing like wet dogs.” He may or may not seek the spark between two things, two images, as Zen poetry so often does; instead, he may leave us—having carefully positioned us—transfixed in a precise moment of feeling, the lyrical instant of awakening. In the poem “Winter Twilight,” we can see this demonstrated: “It’s winter now, and almost night, / The grass of the earth is dead. / My window sill has been put on crooked / So that I am chilled by air / Dark and cold. / Outside, I can see no one, / And the last of the sunlight is being hunted down / By something frozen.”

Many of the early poems have an epigrammatic quality, while poems in the later part of the collection are more expansive, including some prose poems. The impulse, however, remains much the same, the later verse providing more detail to more exactly image the place in focus. Hennen’s poetry is the poetry of solitude and intimacy with one’s immediate surroundings, not the extroversion and demonstration of intellect and prowess nor the declarations of activism so prevalent in our time. While not every poem here is of equal luminosity, there are plenty to reward the reader who draws close and listens. “Once in autumn . . . a lone monarch butterfly / Landed on a dry corn tassel / Where it hung with tiny feet / As the cornstalk shivered in the wind. / Left behind by its nomad tribe / What errand was it on? / Who had sent him / Wings thin as gold foil / To be placed carefully on a page / Of the illuminated manuscript of the earth?” It’s a manuscript Hennen is content to read and invite us to read with him.