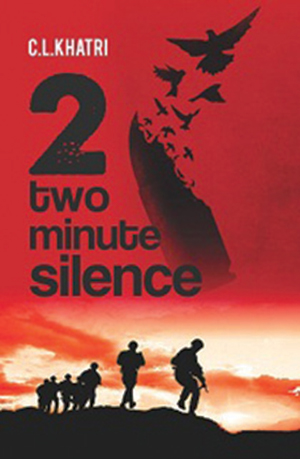 C. L. Khatri’s third poetry collection, Two-Minute Silence, contains thirty-four poems and fifty-five haiku aimed at awakening humanity’s consciousness to traditional cultural values now threatened by globalization in the name of modernization. The poet stands on the threshold, sees the past and the present, and then shares the best that he finds in the past.

Reversal syndrome in the form of domination of man, children, and corporate space over nature, parents, and personal space, respectively, has created chaos ensuing in the loss of a center—the center that holds together human activities including institutional, political, social, and even personal ones. The present culture may be grand or glorious from outside, but it has made man shallow and empty from within. The poet intends to make people understand that they are not machines but human beings who, with cultural values, are capable of spreading love, peace, and happiness.

The poet raises environmental issues when he refers to shrinking space, shrinking sun, stinking water of the sacred river, sleeping birds, and falling leaves. Paying homage has become almost a ritual, a formality—followed in words, not in spirit. It seems that people are dead within though they are alive physically. The poet wonders and traces the cause of a troubling internal diaspora. This internal diaspora raises the question of urban versus rural in the transitional phase of globalization. “I am at the cross road / neither rooted / nor uprooted / coin a term between / native and diaspora.”

Two-Minute Silence is rooted in irony (Can’t we do with one minute . . . ?), suggestive symbols (“Watermelon being sliced for quarreling cousins”), rich imagery (“With pitcher on the side / women walking back home / a slow rhythmic dance”), musicality of folk songs (“Dance Jogi ji dance / Holi ka hai trance / Jogi ra sa ra ra ra”), and Indian words that reveal the topography and traditions of Bihar, in particular, and of India in general.

Two-Minute Silence connects all people into one thread—the thread that binds them to their cultural roots. It establishes C. L. Khatri as a promising poet who values human relationship and considers the whole world his home.