The Shipwrecked: Contemporary Stories by Women from Iran 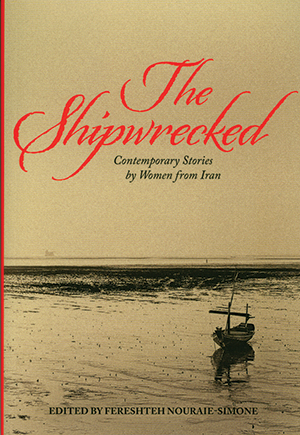 The Shipwrecked: Contemporary Stories by Women from Iran emphatically drives home that “the personal is political.” Fereshteh Nouraie-Simone, editor, historian, and professor at the American University School of International Service, chose thirteen stories reflecting the lives of a spectrum of women—married, single, young, old, poor, middle-class, wealthy, laborers, professionals—in Iran after the 1979 revolution.

Magical realism in several of these tales produces Wonderland-like disequilibrium where facts are irrelevant. In Moniru Ravanipour’s “The Shipwrecked,” the executed meet under the sea, still not free even after death. The nameless protagonist in Shiva Arastouie’s “The Queue” tries to get her university diploma after being suspended from her field of study seven years ago, but the lines are long and she isn’t feeling well. She repeatedly leaves to get a drink and returns to resume her place in the queue, but no one remembers her and their faces have aged. She eventually gives up and goes home, but she can’t get in and no one hears her knock, though she can see her family inside.

Employing a disconcertingly breezy style that conveys the tenor of their former life, “The Maid,” by Goli Taraghi, depicts a privileged family left bewildered when their servants desert them in the aftermath of the revolution, and noblesse oblige is insufficient when long-simmering resentments surface. “There was only one thing certain: neither side was in the same position as in the old days.”

In a society where everyone is encouraged to watch their neighbors, prurience is given de facto sanction and strangers become jailors, as in Fariba Vafi’s “Unsettled, Unbound.” A young mother, alone in her apartment while her husband works in the city, is at the mercy of a landlord who feels entitled to intrude under the guise of righteous guardianship. Then there are the literal jailors. A fifteen-year-old girl is held in solitary confinement for political activity in “The Burnt Sound,” by Behnaz Alipour Gaskari. When she’s arrested, her botany project is abandoned on her bedroom floor along with her childhood. The clothing required of women is a chronic condition—like a limp. The mother in Taraghi’s story “covered her head even when she answered the phone.” The mother in “Dogs and Humans,” by Fereshteh Molavi, knows that she can only “pull my sleeve back as far as is permissible to reveal the watch.”

Mitra Davar’s “Intercession,” Masih Alinejad’s “A Bloody Day of Ashura,” Shahla Zarlaki’s “The Bathhouse,” and Zohreh Hakimi’s “The Wandering Cumulus Cloud,” grouped together in a bloody quartet, compare similarities and contrast motivations for the violence in each. The first is a religious celebration; the second, a political demonstration; the third, a bombing during the Iran-Iraq War; and in the fourth, a woman abused and beaten by her husband is refused sanctuary by her father in the name of family honor.

The contributors to this collection are experienced—many prizewinning—writers, some of whom are expats while others live and write in Iran. The women in The Shipwrecked simply want and deserve the right to choose the direction of their lives.