Letter to Jimmy: On the Twentieth Anniversary of Your Death by Alain Mabanckou 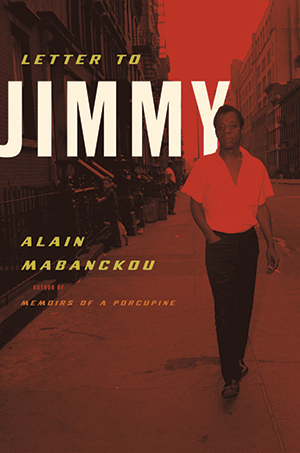 In Letter to Jimmy, Alain Mabanckou gives a heartfelt tribute to James Baldwin. Gazing at Baldwin’s black-and-white picture, the author’s mind wanders and takes us into Baldwin’s life and peregrinations. Mabanckou uses the informal “you” to converse directly with his American counterpart and thus create an intimate setting in which he also refers to Baldwin by his nickname, Jimmy. Despite his apparently casual tone, Mabanckou’s essay displays a profound respect and admiration for his subject. He first presents an eloquent picture of the main events of Baldwin’s life, which began in 1924. The author was raised by David Baldwin, a preacher his mother wed when James was very young. The family lived in impoverished Harlem, where Baldwin and his eight siblings witnessed the damages caused by high crime rates and intense racial discrimination. Mabanckou chronicles the rising tension between adoptive father and son as James grew up to follow his own path, one that contradicted his father’s Manichean view that all Caucasians were “White demons” and the enemy—a view that eventually ended James Baldwin’s involvement in the church.

Having left his neighborhood, he put down roots in Greenwich Village, a bastion of liberal thought reputed for harboring an eclectic and vibrant community. In such an environment, Baldwin no longer hid his homosexuality. In 1948 he eventually followed the Harlem Renaissance movement that flourished in France, where artists like Josephine Baker and W.E.B. Du Bois lived. He befriended prestigious French authors, like Sartre and de Beauvoir. France became Baldwin’s adoptive country, where he resided until his last breath in December 1987 in Saint-Paul-de-Vence.

Baldwin traveled back to the United States to add his support and voice to the civil rights movement. Even though he advocated for more liberties for African Americans and homosexuals, he wanted to maintain his freedom and did not offer a blind allegiance nor sympathize with certain groups. He found the concept of “Négritude” confusing and the ideas of the Black Muslims extreme.

These flashbacks into Baldwin’s life offer Mabanckou an opportunity to reflect on contemporary France and Africa, for he draws parallels and contrasts between France’s difficulties with immigrants from former French colonies and the United States’ tradition of welcoming immigrants.

Mabanckou and Baldwin share some similitude in their trajectories: born from unknown fathers and exiled from their homes, they both blossom intellectually in their adopted countries. They both also break ground with their literary work in trying to not let their art be restricted by perceptions of what is expected of them. For instance, Baldwin’s novel Giovanni’s Room, published in 1956, deals exclusively with characters of European descent. No mention here of the African experience. Instead, in a surprising twist, the reader is invited to reflect on same-sex relationships.