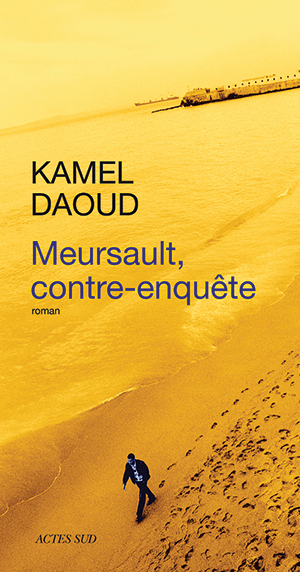 Kamel Daoud, well known in Algeria for his political columns that criticize the government, has turned to literature to describe the complex heritage of the past in present-day Algeria. This is his first novel.

Meursault, the narrator of Camus’s L’étranger, is one of the most famous of all characters in French fiction. Daoud’s novel is a counterinvestigation, contre-enquête (a rewriting, rather as Jean Rhys rewrote Jane Eyre), but unlike Rhys’s novel, the story is told with sympathy for the narrator and for Camus. Haroun, an elderly Algerian, is the brother of Moussa, Meursault’s victim, the nameless “Arab” shot on the beach, although, as he remarks, the Algerians did not think of themselves as “Arab” but as Muslims. In an echo of La Chute, he tells his story to an unnamed visitor in a bar in Oran. He has learned French to try to understand Moussa’s story. He wants to find some peace, to no longer be pursued by a phantom.

Haroun was a child of seven when Moussa was killed. His mother searches with no luck to find the body and continues to be obsessed with the death throughout her life. At the beginning of the novel, as her mind no longer functions, Haroun says: “Aujourd’hui M’ma est encore vivante. Elle ne dit plus rien.” (Today Mama is living, but she no longer says anything.)

There are numerous references to L’étranger and occasional direct quotations. For example, Haroun finds Friday—not Sunday, as Meursault did—boring, as he has nothing to do. A neighbor disturbs him with long recitations from the Koran.

Haroun finds the French who return to visit independent Algeria uncertain of what to do, but he has no sympathy for them. Algeria now, however, has lost all contact with French culture. It is becoming a religious state where alcohol is banned and in which there are no natural relationships between the sexes.

In 1962, just after Algerian independence, Haroun murders a Frenchman. He is called to explain himself because he did not fight in the Resistance, when killing a Frenchman was a good idea. He finds that the Koran was right to say that taking another’s life is the worst sin.

Like Meursault, Haroun goes to jail, where he tells his fellow prisoners (now French) that he has killed a Frenchman. Haroun finishes his story imagining himself as Meursault, with a slight reworking of the outburst to the chaplain. “Un jour l’imam a essayé de me parler de Dieu . . . j’ai tenté de lui expliquer qu’il me restait si peu de temps que je ne voulais pas le perdre avec Dieu.” (One day the Imam tried to talk to me about God. I tried to explain to him that I had so little time left that I didn’t want to waste it with God.)

He imagines himself, like Meursault, being greeted with “beaucoup de spectateurs . . . et qu’ils m’accueilleront avec des cris de haine” (a large crowd of spectators . . . who will greet me with cries of hate). Meursault will be executed, but Haroun will be condemned to wander.

Meursault, contre-enquête was awarded the Prix François Mauriac. It is a fine examination of the relationship between independent Algeria and France and has received much critical praise.