The Book of Strange New Things by Michel Faber 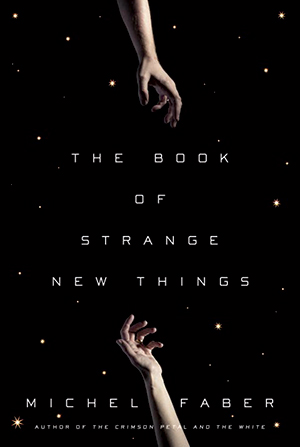 In a 2008 interview occasioned by publication of his novel The Fire Gospel, Michel Faber said, “I think there is that very basic yearning for something or someone to be looking after us, for there to be a framework holding the universe together that is benign and intelligent.” This yearning is at the heart of Faber’s newest, and reportedly last, novel, a deep inquiry into the nature of religious faith and its durability under extreme conditions.

Peter Leigh is a thirty-three-year-old minister. Once a derelict, thief, and addict, Peter is now a man of God. With his wife, Bea, also a Christian, he lives in England, working as an evangelist.

Peter has been chosen by USIC, a mysterious multinational, to travel to Oasis, a planet “in a foreign solar system, trillions of miles from home,” where USIC has established a base. Bea, not chosen, remains behind. So vast a distance separates Peter and Bea that they can communicate only via “the Shoot,” USIC technology that transmits text messages—essentially, interstellar email.

The landscape of Oasis is austere, flat, almost barren. The indigenous inhabitants, the Oasans, are humanoid but not human: in their physiology, psychology, and culture, they are wholly alien. To humans they are virtually indistinguishable, their age and gender indeterminate. They seem caring, humble, hardworking . . . impossibly benign, with “no dark side at all.” With them USIC has established a kind of barter system: Oasans supply humans food; USIC supplies Oasans medicines. The Oasans demand one thing more: a Christian minister.

At the Oasan settlement Peter finds, unexpectedly and inexplicably, that many of the Oasans are already devout Christians. They press him to preach the “teachings of Jesus,” to read from the Bible, which they call “The Book of Strange New Things,” to “read and read and read until we understand.”

As Peter’s obsession with the Oasans grows, he grows more distant emotionally from his wife. Ultimately, this trajectory leads both Peter and Bea to question the existence and efficacy of God.

As in The Fire Gospel, Faber is also concerned with faith. Peter believes in God as an active agent, overseeing, shaping, and explicitly instructing every individual. His belief is adamantine. Whatever the situation, Peter responds with some variant of “God is in control.” This is crucial, for Peter’s mind is the lens through which we see and interpret everything; our only other information comes from Bea’s Shoot messages.

Faber’s use of a human-alien meeting as a cauldron for theological inquiry situates The Book of Strange New Things in a long line of carefully crafted, award-winning novels—from A Case of Conscience (1958), by James Blish, in which a Jesuit biologist encounters a race that seemingly has attained moral perfection with no notion of God or original sin, to The Sparrow (1996), by Mary Doria Russell, in which another Jesuit’s interaction with aliens challenges his conviction that God is benign.

Some reviews have pondered whether Faber’s novel is science fiction—a question as uninteresting as it is irrelevant. What matters is that—as in many stories in Faber’s Some Rain Must Fall (1998) and in his first novel, Under the Skin (2000), which with his latest novel forms a kind of diptych—he appropriates science-fictional devices to explore vital human issues—faith, communication, loyalty, love—from a perspective that would not otherwise be possible. Peter must be separated from his wife by distances so vast that their communication is severely circumscribed. Peter’s flock must be genuinely alien beings that present insurmountable differences in language and culture.

This subtle, ambitious, always-unpredictable novel is immersive and deeply moving. Once finished, it lingers in the mind, its insistent strangeness leaving a residue of disquiet and wonder.