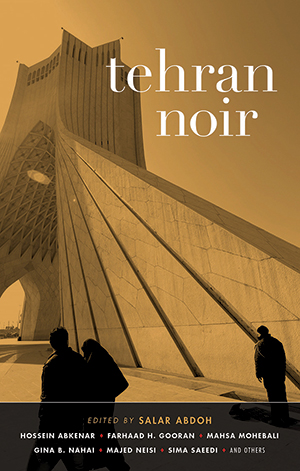 Tehran Noir is one of the new books in the Akashic Books noir series, which was launched in 2004. It has so far covered stories from various cities around the world, including Madrid, Jerusalem, Paris, Havana, and Istanbul, and many cities around the US such as Detroit, Baltimore, Boston, New York, Las Vegas, Kansas City, and Washington, DC. The recent addition to the series takes English readers to a city that many world travelers do not usually choose as a vacation spot and introduces us to authors who, through their fiction, take us to a Tehran that might even be an unfamiliar sight to its own residents.

The book is divided into four sections—“The Crime Pages,” “When a War’s Not Over,” “Proper Burial,” and “The Executioner’s Song”—containing thirteen stories. It begins in the back alleys of Tehran with a group of drug traffickers and ends in Los Angeles, the city called Tehrangeles by many Iranians, where an immigrant Iranian man works for a gay Hollywood couple. Eleven stories were written in Persian and translated by Salar Abdoh (two were written originally in English), making the book one of the “75 Notable Translations” picked by World Literature Today for 2014.

Salar Abdoh himself was born in Iran and had to move to the US with his family during his teenage years. Today a co-director of the Creative Writing Program at the City College of New York, he divides his time between New York and Tehran. His writings in English include The Poet Game (2000), Opium (2004), and Tehran at Twilight (2014).

For this collection, Abdoh worked with famous and less-famous authors, also with journalists, commissioning them to write for the book, strongly emphasizing the editing process. Each of the authors wanders around the city with her own camera, focusing on viewpoints and concerns that are sometimes shared, sometimes particular to the author, using her own style and voice. As a result, the book becomes a varied, engaging collection that gives us a colorful, fictional, and yet real picture of the city whose residents’ lives are complicated by the social and political issues woven into their very being.

From two friends growing up together and involved in the murder of the woman they both love to a banker whose life is forever haunted by men from the “shadow government”; from a journalist following the case of a missing person to a woman who shares a night with a hustler at her husband’s hangout apartment; from an Afghan corpse fixer who thinks he can find refuge in Tehran to an Iranian emigrant who returns home only to get involved with a married woman; from an ex-political activist seeking revenge to a Jewish antique gallery owner who finds himself unearthing a grave in the British Embassy in Tehran to steal a statue for his ex-interrogator—the book puts under one roof characters who are all, in one way or another, representatives of the complex, multilayered, yet-to-be-understood metropolitan of Tehran. Like any other short fiction collection, Tehran Noir has of course both stronger and weaker stories. Still, it is a tour de force not to be missed.