Don’t Call Me a Victim! by Dina Yafasova 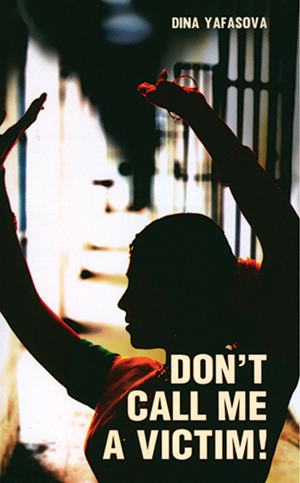 When a journalist outgrows her role as a dispassionate recorder of events and wants to share her deep understanding of this world, she writes a book. Dina Yafasova’s Don’t Call Me a Victim! could be viewed as a documentary or a case study in the tradition of New Journalism. The author compels her readers to focus heart and mind on just one issue—the illegitimacy of torture—leaving no room for excuses. She writes of the unlikeliest of victims—a young girl who gladly travels every day to a remote village to educate girls. Tortured by the police, she becomes severely disabled and commits the rest of her life to seeking justice. It’s a story that illustrates our human capabilities for banal cruelty, homophobia, and exceptional perseverance and kindness.

Written in 2009, the book remains timely. The individual family tragedy it portrays occurs in distant Calcutta, yet it resonates strongly with issues currently in both domestic and international headlines. It is unclear why the original language of the text and the work of the translators, who not only translated but also championed the book, are downplayed through the book’s presentation, particularly because there is no indication in the text itself that this story has any connection to the language of its original. Its characters come from India, Denmark, Kazakhstan, Sudan, Israel, and the US. Only accidentally will the general reader find out that Dina Yafasova writes in Russian. As a Russian-language text, the book becomes urgent for the post-Soviet countries, many of which remain oppressive, some of which have found or will find themselves in the place of contemporary Ukraine, where many people were kidnapped and tortured. Further, even though the book takes a firm stand on the issue of torture in general, it does so primarily through the narratives about the monstrous mistreatment of women in the “third world.” It exists in Russian despite the near-death experiences of Yafasova, Suzanne Brøgger (a major Danish writer who supported her), and Archana Guha (the heroine). Melanie Moore and Clare Kitson continue to raise awareness in the West about women and torture through translation. This is an international feminist humanitarian effort.

The origins of this text add to its complexity and will make it of interest to a broad range of specialists not only in world literature, feminism, women’s studies, and general psychology courses, as its content suggests, but also in post-Soviet studies, trauma narrative studies, and Russian literature classes focused on the former Soviet Empire.

The general reader interested in the subjects of torture, women’s rights, and post-traumatic disorders and dysfunctions of torture victims (and their torturers) will appreciate the complexity of the problem and the restraint with which the most outrageous material is treated. The book’s honest, merciful, yet relentless voice, masterfully realized by the author and sensitively rendered by the translators, will not leave anyone indifferent.