The Meaning of Names by Karen Gettert Shoemaker 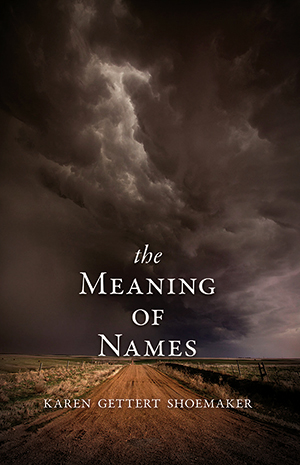 With her timely first novel, The Meaning of Names, Karen Gettert Shoemaker presents us with two unique main conflicts: the great flu epidemic and the racism encountered by German Americans living in Nebraska during World War I, a rarely seen perspective. Besides this book she is also the author of Night Sounds and Other Stories. She lives in Lincoln, Nebraska, and is German American herself. Inspired by true events from her own family, she tells the story from the perspective of the protagonist, Gerda.

On the way to her aunt’s funeral in eastern Nebraska in 1918, Gerda—now married to Fritz and living in the western part of the state—witnesses a traumatic and violent act of discrimination on the train with her children. The non-Germans in the state feel that they “don’t need to wait for [their] uniforms before [they can] start protecting [the US] from Germans.” The US has entered the war, and every eligible man is being drafted (including the German Americans).

Upon her arrival at her parents’ home, Gerda is confronted by her father, who thinks that she shouldn’t have come. Her father didn’t like her getting married to Fritz (a poor man); so she comes home to try to deal with this situation, besides wanting her mother to meet her children and going to her aunt’s funeral. Gerda’s mother and sister had come from Germany and “married men from their hometown in Germany and raised their families within a quarter of a mile of each other in the New World.” Gerda fears getting back on the train to return to her husband due to the ethnic profiling but manages to return somehow. At home, the husband is afraid of what would happen to the family if he were drafted.

The other very timely aspect of the novel is the world flu pandemic of 1918–19, when between twenty to forty million people died, the most devastating epidemic in world history. With the recent Ebola virus scare, we have seen how easily a virus spreads around the world. What would we do if it became rampant here? Would schools be closed, church services canceled? The conflict between two other characters re-creates what happened back then; the priest, Father Jungels, and the doctor, Gannoway (a heathen), discuss evolution, among other issues. On top of everything, Gerda strikes up a friendship with the mailman, Mr. Burke. Will she have an affair with him or not? And then a terrible storm comes, perhaps a tornado . . .

The novel begins with the death of a mother in childbirth (Gerda’s sister) and ends with Gerda in childbirth. Will she make it? She says, “We are mortal, fragile. . . . How easily what is made can be taken away.” Reading this novel puts the reader on the edge of her seat; it is intensely moving, and Shoemaker teaches lessons about social tolerance and how dangerous small-mindedness can be, an important lesson for all ages, but especially today.