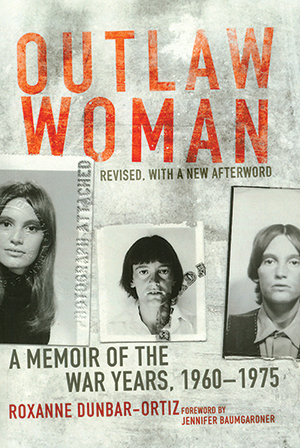 Starting where her previous memoir, Red Dirt: Growing Up Okie (1997) left off, Roxanne Dunbar-Ortiz’s Outlaw Woman: A Memoir of the War Years, 1960–1975 begins with a twenty-one-year-old Dunbar-Ortiz fleeing Oklahoma with her then-husband, Jimmy, and chronicles her pivotal role as an activist in the women’s liberation movement as well as her development of a fierce antiwar, anticapitalist, anti-imperialist, and antiracist feminist political consciousness. With an excruciatingly honest tone and poetic yet straightforward execution, Dunbar-Ortiz traces her time spent on the West Coast, where she progressed from being a scholar to organizing with the anti–Vietnam War movement and assisting other anti-imperialist movements in Cuba and South Africa to the founding of the radical feminist group Cell 16.

As an economically disadvantaged female from rural Oklahoma with American Indian ancestry, Dunbar-Ortiz frequently found herself at odds with, and often critical of, other revolutionary leaders of the times: be it men who refused to address the “woman question” or mainstream feminist organizations that refused to consider other aspects of identity such as race, class, and sexual orientation in their anti-oppression politics. In fact, it is this raw frankness that distinguishes the work. Never nostalgic or sentimental and always self-reflective, Dunbar-Ortiz lays bare the dreadful truths and challenges she and the 1960s movements faced, from the triumphs to the dismal disappointments.

She recalls that despite a deep commitment to a radical feminist lifestyle, she still found herself in a violent relationship with a man and often searched “for male partners as guides.” She goes on to explain, however, that “awareness and knowledge do not automatically erase prior socialization and character defects.” The text is interspersed with little moments of genuine openness such as this, highlighting the importance of not only self-awareness but also an often-forgotten truth—that in order to construct new worlds, one must be willing to do the often-painful work of unlearning the ways of the old.

Dunbar-Ortiz’s Outlaw Woman is an essential read for anyone on the periphery of society who yearns to resist the status quo. It is an even more crucial read for the privileged who may wonder what a commitment to a pluralist feminist politics entails.