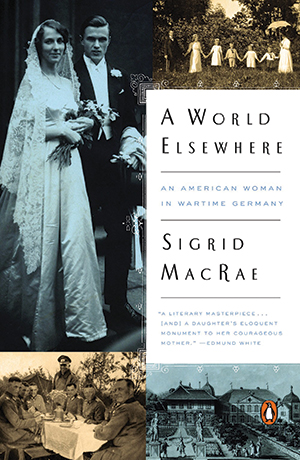 In times of love and war, many people write letters—all of them of interest to someone. But except for the participants themselves, their extended family members, and maybe a few friends, what so-and-so wrote to his love from the Western or Eastern Front is of little interest to us. We don’t know the people and we weren’t there.

The point at which letter-writing passes from the merely personal to literature in its own right is at the level of quality. Are the letters well written? Does the writer have a keen sensibility, a gift for description? Is she insightful, intelligent, and witty? If so, then we are going to be interested in reading her letters no matter how far off her experience is from our own.

The cache of letters that author Sigrid MacRae shares with us in her memoir, A World Elsewhere, is of the literary variety. In fact, these letters are so good that they deserve to be locked away in the Moroccan box that Sigrid receives from her mother, Aimée Ellis von Hoyningen-Huene, erstwhile protagonist of a fractured fairy tale, a Connecticut Yankee in a crumbling White Russian court.

MacRae’s father, Baron Heinrich Alexis Nikolai von Hoyningen-Huene, is from the Baltics, a heavily contested area between Germany and Russia since the time of Peter the Great (1672–1725). Unseated from their estate in Saint Petersburg by the Russian Revolution, the von Hoyningen-Huene family is forced to begin their wanderings across Europe a dozen years before the rise of Nazism. To the Baltic German aristocracy trying to hold on to its ancestral lands in present-day Lithuania, Latvia, and Estonia, Stalin and not Hitler is the one to fear.

While reading about Aimée and her six children living in Nazi Germany, I couldn’t help thinking about the von Trapp family. Singing and dancing aside, A World Elsewhere reads a lot like an alternate version to The Sound of Music—one in which the Christopher Plummer character reluctantly accepts his naval commission and there is no escape to Switzerland. What would have happened to the von Trapps if they’d remained in Austria?

For the past fifty years, the prevailing narrative from World War II has been one in which all Germans (and all Japanese, for that matter) have been painted with the same brush. Germans were either Nazis, collaborators, or cowards who stood by and did nothing while six million Jews were exterminated. With the help of her parents’ letters, Sigrid MacRae’s A World Elsewhere has shown us that there are other stories that need to be told if we are ever to fully understand the Holocaust.