Last Day of the Year: Selected Poems by Michael Krüger 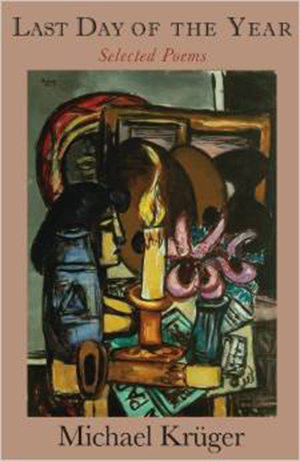 Poet Michael Krüger feels with unmistakable conviction that one purpose in life is to fully illustrate how a day without poetry is a day lost forever. This is clear in the bilingual selection of poems presented in Last Day of the Year, in which this poet’s distinct voice explores the delicately undeniable relationship between the seemingly mundane and the historically significant. Through chronicling his encounters between the two, this collection showcases the development of a poet’s voice over time and enables Krüger to house the psyche of an entire nation within the lyrics of ordinary experience.

The relationship between the surface and the profound is initially framed with selections from Richard Dove’s translation of Krüger’s 1978 work Diderots Katze (Dide-rot’s Cat, 1993) and his 1996 Nachts, unter Bäumen (At Night, Beneath Trees, 1998). Nowhere is the coexistence between the two more apparent than in his poem “Diderot’s Cat,” which contrasts the inner musings of French philosopher Diderot with his outward relationship to his cat: “Thirty years’ labor towards the Encyclopédie / and still the machine’s not working / the way it should. He gingerly probes / the bones, the bone structure, of his cat.” Diderot’s outer appearance does not indicate the excruciating mental and spiritual torment he undergoes. In much the same way, Krüger’s masterful juxtaposition of Diderot’s exterior surroundings with its conflicting world of knowledge highlights the transitory as that which often gives way to revelation.

The interrelationship between temporality and permanence becomes increasingly apparent as the reader chronologically traverses the archives of Krüger’s poetry. Excerpts from Karen Leeder’s translations of Krüger’s 2007 Unter freiem Himmel (Under an open sky) and his 2010 Ins Reine (Fair copy) chart a consummate progression toward expertly joining the ephemeral and the eternal. A clear example of this is seen in his poem “Die lange Nacht” (“A Long Night”), during which a simple miller embodies the connection between transitory existence and time immemorial: “The miller sleeps. His ancient beard / crawling with stories, that crackle / like fire, stories of war that revolve / in your head.” This excerpt displays the essence of Krüger’s poetry at its crest, as that which exposes the boundless significance of our everyday existence. In doing this, Krüger forges an even more mutually dependent relationship between our days on earth and the relevance of poetry.

Above all, this collection of lovingly translated poems followed by the German originals highlights the temporal as that which reveals the complexity of humanity’s psyche. The showcased poems in this volume entwine these two arenas together so thoroughly that it is not only every day, but each moment in our days, which merge with verse.