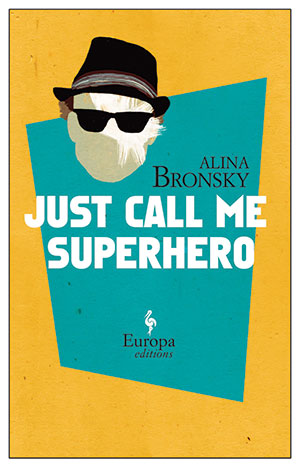 Alina Bronsky’s deftly translated novel is a coming-of-age story as well as one of coming to terms with oneself and the world. Our “superhero” is seventeen-year-old Marek, who had been a handsome boy and the much-admired star of his high-school theater group—until he gets mauled by a Rottweiler. After a number of surgeries and a long stay in the hospital, he has secluded himself at home, declining all outside contact because he knows his appearance shocks people—they seem to cross the street to avoid looking at him.

By a subterfuge, his mother, Claudia, gets him to go to a family services center to take what he instantly recognizes to be group therapy. He stays only because he’s completely smitten by a member of the little group, the young beauty in the wheelchair, Janne. This group of variously handicapped teens is led by “the guru,” a former kindergarten teacher who realizes the only way to get the group to overcome their individual handicaps is to isolate them in a house in the remote countryside where they’ll have to deal with one another, acknowledge their weaknesses, and find their strengths. It is there that Marek recognizes that he’s really the least impaired of the group—just the ugliest.

This is not enough, though, to get him out of his self-absorption; the death of his father forces him into this process. He learns about it from his six-year-old half-brother, whose mother, Tamara, had been Marek’s Russian nanny. Tammy, it turns out, is even less mature—and needier—than Marek. Between Tammy’s mother, who comes from Ukraine for the funeral, and his own, Marek gets a couple of doses of reality. He badly underestimates Tammy’s mother, a multilingual professor, who pulls off his sunglasses and puts her heels through them, and he sufficiently exasperates his own mother, who answers his complaint that they never have any company at home by finally telling him that it is because he has scared everyone off with his obnoxious behavior. To top that off, “the guru” and the whole therapy group show up. All this together necessitates that he at last “man up,” especially in front of Janne, and truly play the man of the house.

In the end, Bronsky depicts Marek successfully en route to maturity as he has some epiphanies about others, and thus himself, and she does this by telling a basically warmhearted story in a wickedly funny way, through this morbid teenage narrator’s temporarily jaundiced eye. But if you want to learn why Bronsky is referring to a superhero, you will have to read it yourself—you’ll be charmingly engaged.