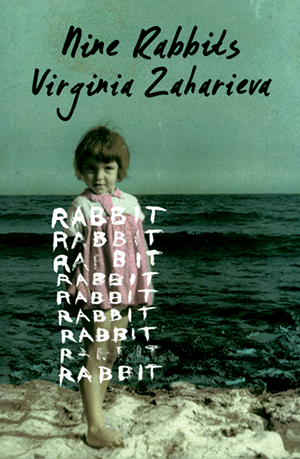 Virginia Zaharieva is a Bulgarian author, journalist, and psychotherapist. She has written three books of poetry and the novel Nine Rabbits. This novel was the second best-selling book by a Bulgarian author in Bulgaria in 2008 and was published in English first in the UK in 2012, and now in the US. Zaharieva grew up in Sofia and has an MA in linguistics and psychology from Sofia University, having later studied in Germany and Switzerland.

Formally a novel, the story is part memoir, part collection of short stories, essays, diaries, and travelogues. Binding it all together is the main heroine, Manda. In the first part, we see Manda growing up in the 1960s in the charming ancient Bulgarian town of Nesebar on the Black Sea. Public life is dominated and tightly controlled by the communist regime. As a result, people turn inward to family life and sustaining themselves the best they can. The house where Manda grows up has a lush garden, providing many of the ingredients for the tasty dishes cooked by her tyrannical grandmother, Nikula, who does not shy away from dispersing severe physical punishments to her grandkids. The keen observations of Manda and flashes of humor color this part.

The second part traces the grown-up Manda struggling to rediscover her creative self while Bulgaria struggles to transition from communism to modern democracy. We follow Manda through childbirth, separation, divorce from an abusive husband, and finding new love. Now free to travel, we share in the discoveries of Manda in places like Paris, Russia, Osaka, and Dominica in the Caribbean. Some tales, like the European literary train or the Tomato Soup poetry reading, are clearly based on true stories, so the reader is constantly left to guess where the memoir ends and the embellishment and fiction begin. The second part is less focused and reads a bit like a kaleidoscope.

Throughout the book we are pampered with delectable recipes from the Bulgarian and Czech cuisines, enhanced with international flavors in the later parts. These make reading the book especially inviting.

The novel is masterfully written, with subtle and delicate creation of the setting and characters. The translation by Angela Rodel is wonderful and tries to stay as close as possible to the original, even when finessing hard-to-translate plays on words.