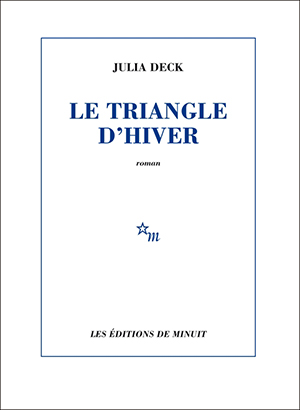 Second novels are often where literary careers are made or, on the contrary, where they founder. Julia Deck’s second novel for Éditions de Minuit amply fulfills the rich promise of her first book, Viviane Élisabeth Fauville (2014), and puts on display an impressive lightness of touch and a narrative confidence that is certain to please. That latter quality serves Deck particularly well, for the story she tells here contains more than a few twists.

The first person we meet is a young woman identified only as “Mademoiselle.” Having no real achievements to her credit, and still less ambition, she finds herself in constricted circumstances and decides that she must make a change: henceforth, she will present herself to the world as the novelist “Bérénice Beaurivage.” It is an identity that demands more and more upkeep the longer she maintains it. Sooner or later, one expects a novelist to write something, whether good, bad, or indifferent; and “Mademoiselle” will grapple unequally with that problem. When she meets and seduces the “Inspecteur,” one might imagine that her circumstances will improve. And indeed they do for a moment, until the journalist Blandine Lenoir imposes her troubling—and triangulating—presence.

Quirky and pleasing geometries of various kinds animate this novel, in which things are constantly in flux and appearances are in some ways more reliable than realities. The action moves from Le Havre to Saint-Nazaire, to Marseille, to Paris, and back again to Le Havre. One follows the characters in their peripatetics with assurance, until it becomes clear that they are not the people one understood them to be. The correspondences and personal reciprocities that prevail among them are highly contingent, and the terms upon which they rest can be recast in the blink of an eye.

Even the most attentive of readers is likely to be nonplussed at some point in this novel. But that sort of narrative sleight of hand is part of the fun, of course; and like any successful feat of prestidigitation, it relies on our willingness to be fooled.