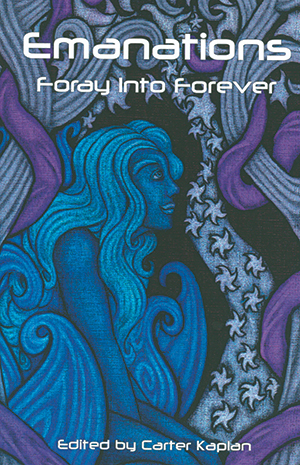 Emanations: Foray into Forever is a refreshingly focused collection—focused by staking out a particular frequency of literature to explore. This hefty volume is the fourth in the Emanations series, which seems to be groping toward a renewed, internationalized avant-garde. Series editor Carter Kaplan has assembled fine offerings, and what unifies the whole is the specific range of experiment it hosts—now slyly unruly, now intellectual, now delighted. This is an expression of the range of Kaplan himself, in the (correct) assessment that others of us will enjoy being invited along.

Emanations has no manifesto, nor any specific direction it is seeking to flesh out. This volume is no explosion per se of poésie concrète, nor futurist typefaces, nor ragged, startling postmodern prose archipelagos—or anyway just a bit. Given its inclination, the whole is notably readable. There is an effort to balance works with generous helpings of prose that push a bit against expected narrative frames, and poetry that pushes quite a bit more than that at times. Yet we’re in a kinder, gentler age than the futurists were, which the works presented here reflect.

There are three sections: “Tales,” “Verse,” and a short collection of essays, “Themes,” prefaced by a deft introduction by Kaplan, titled “Out of the Hermeneutic Captivity.” In part, he proposes “to see a conceptual coherence among the conditions of a lost army, a lost civilization, and a lost reader. . . . It is incumbent upon a people lost in the mists of myth to seek a way clear of the foundations of their bewitchment, and to discover those species of philosophical clarity that represent both the means and the end of escaping from confusion.” While some pieces seem situated still within the labyrinth, the play of forms can be liberating—this might help some seeking a path out.

There are more than enough high points to make this volume a worthwhile addition to any library—something to return to whenever the muck clears. From the Sri Lankan poet Dhanu Kandappah, “In search of an inner goddess-muse”: “thumb and forefinger / span / the crown / of my head / heavy like a heart / sometimes stone / sometimes song / so like a receding shore / the waves / billow out / like hair, / downspine / this / ancient spine / vigilant like / an archer / seeking / the eye.pupil.depths / of a bird, / in fierce / ambition. / But I will not / release the arrow / I simply seek / sky and flight / stories held / in the eyes of sparrows.”

No piece in this collection is representative; each is a facet compelling us toward gratefulness for such pearls.