The Prophets of Eternal Fjord by Kim Leine 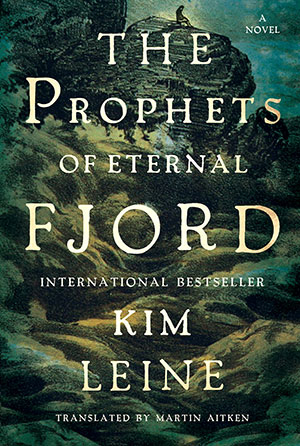 Kim Leine struck literary gold with his fourth novel, The Prophets of Eternal Fjord. It is a big book and a great one too: disturbing, fascinating, confrontational, carefully and engagingly realistic, funny and deeply affecting in its unblinking humanity. The setting is exotic—Greenland some 250 years ago—but despite the formal, sometimes archly “authentic” style, the vitality of the writing bridges distance in time and place.

Leine, a Norwegian-Danish ex-nurse who spent fifteen years on Greenland, has journeyed into his own past and reshaped it in the late-eighteenth-century life of his protagonist, Morten Falck. Through Falck’s eyes, we come to understand the story of the ill-fated but resilient Greenland Inuit—most of us for the first time.

Falck is a rational romantic, a clear-eyed observer doomed to get involved; his mantra is Rousseau’s paradox: Man is born free, and everywhere he is in chains. He studies in Copenhagen—theology officially, to please his father, but medicine on the sly—falls a little in love, passes his exams, and is ordained. Then, as often in Leine’s stories, chance and personality interact to create the unexpected: Falck is picked for a post as minister in Greenland and missionary to any still-unreformed natives in the Danish colony.

The title refers to real people and places. The prophets were a charismatic pair of evangelical Inuit whose followers built a community on the inhospitable banks of Eternal Fjord, all as revealed to them by Jesus. But despite taking the trouble to build a church and burying their dead properly, the Danes became irritated by their impropriety—sex was one of the community sports—and suspected mutiny.

The challenges of Falck’s post are grim—the last minister/missionary hanged himself in the whale blubber boiling house—and include solitude and terrible food. Boredom, lust, and hunger drive him into the company of others, but within the tight, ill-assorted community of displaced Danes and converted Inuit, relationships become tangled. When Falck finally returns home, alone, unwell, and in debt, he walks along the busy city streets, savoring the bustle of strangers he will never have to do anything about, or with, or for. True, by then he has committed most acts any man might consider sinful: apart from sexual ones (every variety, sensually and exactly detailed), he has wavered in his faith and communed with ghosts, killed (accidentally as well as on purpose), betrayed his king, lied, cheated, and stolen, and carried out dubious medical interventions (including an abortion that is an unsparing, virtuoso piece of black comedy).

Leine believes in a kind of human uncertainty principle: chained to conventions we may well be, but freedom is always within reach—only don’t expect too much from it. Out of this gospel of liberating doubt he has created a wonderful book.