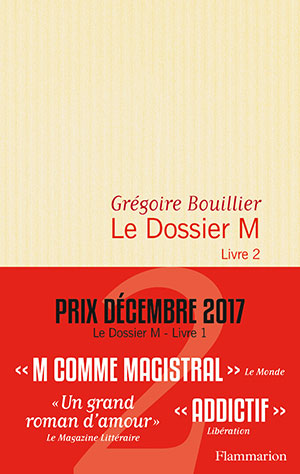 A scant two months after winning the prestigious, quirky Prix Décembre for the first volume, Grégoire Bouillier brought out the second half of his Le Dossier M. Like its predecessor, this massive tome is an unwieldy, unconstrained cornucopia of thoughts and memories around the author’s relationship with the inscrutable M. The book’s contents even spilled out onto a website dedicated to presenting various mementos and realia at ledossierm.fr. For all the heterogeneity Bouillier provides, though, the two volumes betray wholly dissimilar emotional modes. The first volume was more or less in medias res, describing and expressing the wild love Bouillier experienced, while this second volume takes on a bleaker, more retrospective stance befitting its subtitle, “After and Long Before.”

For most novelists, the plot and characters must precede the writing; their work consists of arranging words in a way that appropriately depicts these constructs. Bouillier, however, lets the words he sets down take the lead; everything else follows, with little regard for linearity or logical progression. Emotion, rather, is the governing concern. And so Bouillier decides to reveal, at the end of volume 2, just how several episodes described in volume 1 turned out to be false: “Mistakes, retakes: these were, from the very start, the two pillars supporting my story of M.”

Perhaps the greatest success of Bouillier’s massive endeavor has been his way of treating the experience of love—most commonly depicted as a state of altered consciousness—as it really is: a sequence of disconnected events and moments that the human mind retroactively endows with significance. His achievement is so clear, so lucid, and so terrible that the run of novelists has hardly dared to attempt it. It may be that Le Dossier M will fall by the wayside in a few years. But it is my hope that it will be the crest of a new wave of writing that depicts reality not as we fallibly perceive it to be, but as it actually is.