10 Minutes 38 Seconds in This Strange World by Elif Shafak 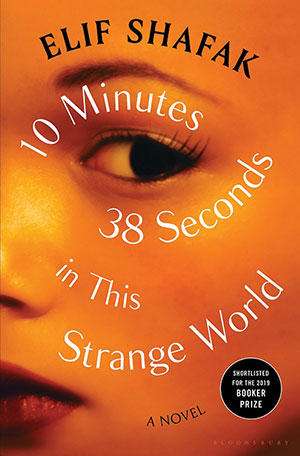 The tale of Tequila Leila begins with an end. The first page of Elif Shafak’s new novel, 10 Minutes 38 Seconds in This Strange World, finds Leila in a garbage dumpster on the outskirts of Istanbul: “she now realized . . . that her heart had just stopped beating, and her breathing had abruptly ceased, and whichever way she looked at her situation there was no denying that she was dead.” This surprising device immediately captures the reader’s attention, and curiosity commands you turn the page and continue turning pages—faster.

Leila’s brain is busy for ten minutes and thirty-eight seconds after her heart stops, and the next two-thirds of the novel trace Leila’s life: her early years in a small Turkish city, how she ended up in a brothel in Istanbul, the hardships and hard-won comforts of that life, and how it ended. The final third of the story is taken up by Leila’s five closest friends, a band of outcasts who make difficult lives endurable—sometimes joyful—on the fringes of a city, country, and society in constant flux.

The structure of this novel is both intellectually satisfying and intuitive, divided into three parts: mind, body, and soul. The chapters of the mind are titled to indicate how many minutes have elapsed since Leila’s heart has stopped. Each memory is associated with a taste or a smell—lemon, cardamom, chocolate, wedding cake, single-malt whiskey, sulfuric acid—which is inextricably linked to a transformation in her life.

The backstories of Leila’s band of friends—her chosen family (“in the desert of life, the fool travels alone and the wise by caravan”)—are interspersed throughout the narrative as each makes their entrance into Leila’s life. The cast is rich and diverse, each sharing a common characteristic: the homesickness and vulnerability of those who don’t fit into the increasingly narrow confines of the socially acceptable.

The many disparate cultures of Turkey suffuse this tale, illuminating the charms and conflicts that both destroy and sustain. Superstition, such as not eating peaches during pregnancy so the baby won’t be born covered in fuzz, coexist alongside such modern marvels as the fourth-longest bridge in the world, spanning the Bosphorous and linking Asian Istanbul with European Istanbul.

Shafak firmly places Leila’s life and death in context, playing out against the backdrop of a convulsing Istanbul in the grip of revolutionary forces from right and left. Shafak weaves intricate details, juxtaposing the changes in Leila’s personal circumstances with the changes in Turkey’s societal circumstances. Leila, whose father’s family is Kurdish, grows up in a house abruptly abandoned by a deported Armenian family. Her father becomes more religiously conservative as society become more “westernized.”

Shafak’s themes are timely and timeless: sex workers and trafficking, the exploitation of refugees, secrets that corrupt, willful ignorance, violence on a grand scale as well as up close and personal, love lost and found, and treacherous hope, which we cannot live with or without. Though often grim, Shafak leavens her story with arch humor and wordplay. “If Paris was the city of love, Jerusalem the city of God, and Las Vegas the city of sin, Istanbul was the city of multitasking.” Shafak is multitasking throughout.

A blue betta fish, kept in a bowl in the house where Leila is born, is released upon the birth of this long-awaited baby. The betta symbolizes individuality, solitude, strength, freedom, beauty, and defiant spirit, all of which are double-edged swords for Leila. The betta is used in the book design as a scene separator—a thoughtful element—and the fish reappears at the end, which is also a beginning.