Venice: The Lion, the City, and the Water by Cees Nooteboom 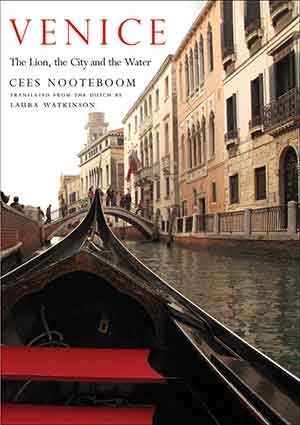 “THE MISERY OF VENICE stands there for all the world to see,” Henry James wrote in Italian Hours, “a thoroughgoing devotee of local color might consistently say it is part of the pleasure.” The Dutch writer Cees Nooteboom is one of those devotees, having made innumerable visits to the city over the past sixty years. From his memories and observations, it’s clear that one hundred years after James, Venice remains a place of contradiction, both morbid and full of life, like a sick but noble animal.

Underneath the monochrome skyline packed with Renaissance masterpieces, a sulfurous lagoon bubbles away, eroding the very foundations of the city. When Nooteboom watches support poles being “extracted like rotten teeth” from “mud the color of death,” another writer might feel encouraged to question the future of the city when the very thing keeping it afloat—tourism—is one of the main catalysts implicated in the rising waters threatening its existence.

But Nooteboom is more concerned with memory, both personal and communal. Already confident that tourism has done more to harm the city, more than its sinking ever could, he does little investigation. Instead, he prowls the streets, conjuring up emblems of the past in statues, paintings, and gardens, seeking answers to questions that are more like riddles: Are we still who we once were? and Were we ever who we once were?

Late in the book, he considers a gondola as it shunts by, crammed with faceless tourists snapping pictures: “Once upon a time they did not merely transport people who wanted to sit ignorantly . . . but also those who really knew something about the city . . . people who were there for their love of the city . . . a better kind of tourist.” It’s clear into which camp Nooteboom places himself. He may feel miserable about the mass onset of visitors to his beloved city, but his deep knowledge and love of Venice’s past provide the suitably pleasurable Venetian contradiction.