The Barbary Figs by Rashid Boudjedra 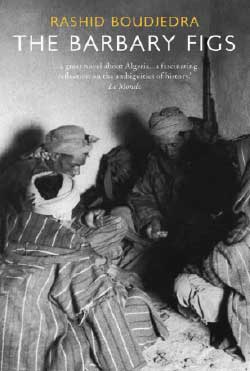 When Rashid and Omar spend an hour together on a flight from Algiers to Constantine, the former decides he will use the occasion to “exorcise his [cousin’s] demons, relieve him of his grief,” legacies of both the horrors of Algeria’s years as a colonized nation and the cousins’ time fighting the French during a savage war of independence. In 162 pages, Rashid Boudjedra provides a history en petit of Algeria since the French invasion of 1830: Rashid and Omar have learned about the brutalities committed during the conquest of their country, described in the translator’s afterword as “one of the first modern instances of systematic ethnic genocide” when, for example, a certain General Pélissier “smoked out” of a cave more than a thousand members of the Riah tribe. Their own experiences as young soldiers are conflated with those of others resisting colonial domination, through “the icy Algerian winters and the mossy Vietnamese jungle,” experiences characterized by gratuitous bloodshed, disease, and torture.

The Barbary figs of the title first appear as symbols of a high Algerian civilization: they feature on the coat of arms of Si Mustafa, Omar’s grandfather, and on his office shelves, beside trophies he has won as a successful breeder of horses. Si Mustafa “stood proud . . . Just like his Barbary figs,” despite losses and suffering brought about by conflict with the French. Elsewhere in the novel the figs are “symbolic guardians that had always kept watch over our country. Despite all the disasters and the tragedies, despite the genocide!” Finally, figuiers is on the lips of the French an ethnic slur, a way of referring to the despised Algerians.

But Algeria’s pain does not end with the departure of the French. The Organization that had sacrificially fought for independence breaks into bloody warring factions soon after that independence is attained. And Rashid is distraught in 1988 at the sight of Algerian soldiers repressing riots caused by a collapse in the economy.

Naffis-Sahely’s afterword sets Boudjedra’s novel in the context of his career. He began writing in French, changed to Arabic to identify more closely with his country, and then changed back to French. Naffis-Sahely notes the influence of Claude Simon and the nouveau roman on the Algerian novelist, calling his style “verbal excess.” If that “excess” is generally hypnotically effective, it does occasionally lapse into overwriting and self-indulgence.