A Displaced Person: The Later Life and Extraordinary Adventures of Private Ivan Chonkin by Vladimir Voinovich 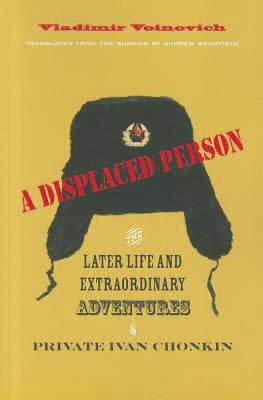 A Displaced Person: The Later Life and Extraordinary Adventures of Private Ivan Chonkin rounds out Vladimir Voinovich’s iconic trilogy about the misadventures of a Red Army soldier in World War II. In 1969 Voino-vich introduced his Private Chonkin, who is something of a Yossarian of the home front (or a “Russian Švejk,” as some have dubbed him), a hapless hero whose heartland values and plainspoken candor expose wartime incompetence and bureaucratic overreach. The first Chonkin book breathed new life into Russian literature’s “Ivan the Fool” archetype and vaulted Voinovich to international fame and celebrated dissident exile. From Germany he continued the series with Pretender to the Throne (1979), which follows a trail of denunciations and intrigue around Chonkin all the way to Lavrenty Beria and Joseph Stalin. That novel, published during Brezhnev’s stagnation and circulated within Russia as tamizdat, felt both subversive and relevant. A Displaced Person is neither.

Which is not to say the novel is without charm. Chonkin and his pining lover, Nyura, remain delightful. Nyura especially steals the show in the book’s first act. Having received no letters from Chonkin, she decides to write them herself, creating an airman whose fearlessness in battle gets him promoted to colonel and eventually shot down and killed. As she reads the weekly missives to the town’s curious gossips, she falls in love with the character she has created, allowing fiction to eclipse reality. Voinovich has explored the interchangeability of reality and representation before, and the theme returns throughout A Displaced Person.

The book’s middle third detours to the Kremlin, where Stalin and Beria reprise their cameos from the last book. Beria’s intrigue switches a factual Stalin for a fictional one, providing some mild Freaky Friday–type humor, but ultimately bearing little relevance to the novel as a whole. When Voinovich mentions, “Of course, both the genuine Comrade Stalin and the fake are secondary characters in our narrative, and therefore, it seems to us that they are taking up rather too much space here,” we can’t help but agree.

The first two books in the Chonkin series managed to satirize the early 1940s and the wartime Soviet Union in a way that was relevant to the Brezhnev-era reader, but since then, Voinovich has not updated his satiric vision. Even as his characters age through perestroika and into the 1990s, their insights and exploits seem to be addressing a late-Soviet readership that no longer exists.

A Displaced Person gives the reader the chance to spend another book with Chonkin and Nyura. Voinovich’s vivid imagination and sprightly prose still animate his world as he updates us on his characters’ lives and brings their love story to a satisfying conclusion. It is a pleasant read, a reunion with old friends, but little more. The sharp wit and penetrating satire are gone, stuck in Brezhnev’s stagnation. And like a reunion with old friends, this book’s greatest pleasure is remembering days gone by.